Decree on the Reform of State and Municipal Print Media: Next Steps

The Law provides for reforming to be conducted in two stages. During the first stage, which has begun on January 1, 2016 the employees of printed mass media subject to reforming shall submit to the founder proposals on reforming and the latter, taking them into account or not, take up decision on reforming as such, chosen stage (first or second) and method. Based on these decisions State Committee for Television and Radio Broadcasting of Ukraine forms two lists – a general one which comprises information on all state and communal printed media subject to reforming and a separate list of editions subject to reforming on the first “testing” stage. The latter has just been adopted by the Cabinet of Ministers. 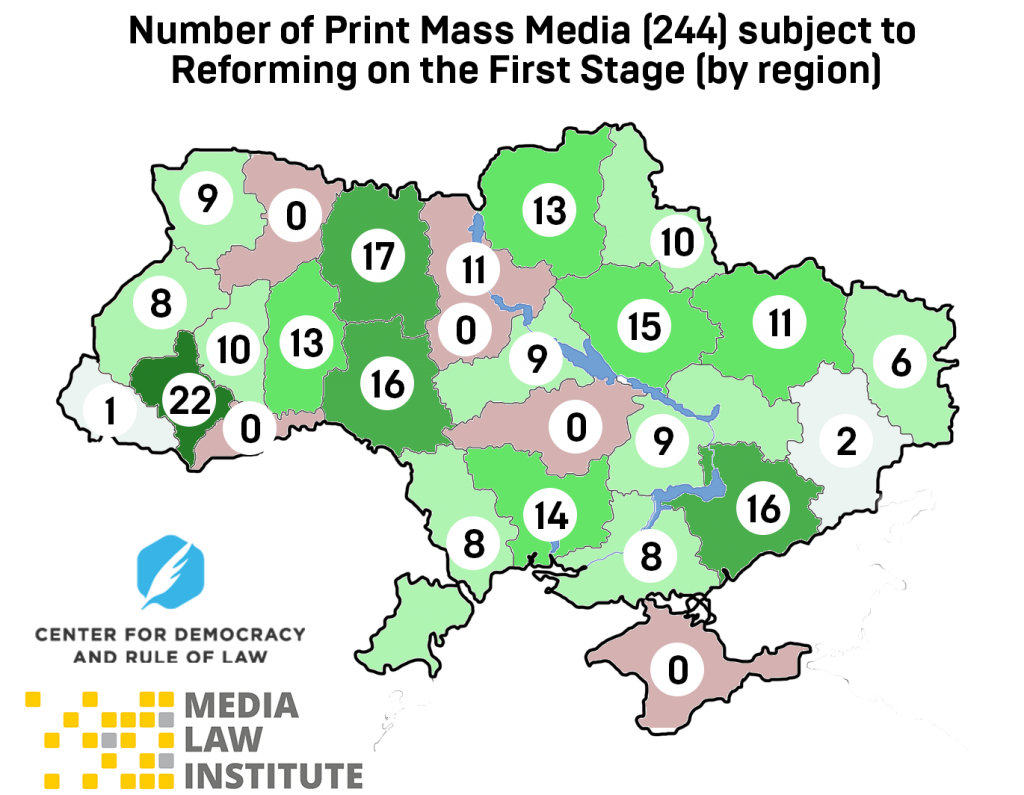 Noteworthy is the fact that decision of the founder on reforming preceding adoption of the List and decision on reorganization of a printed media into an economic entity are two separate decisions having different legal consequences therein. The former serves to determine stage and method of reforming and declares willingness of a printed mass media to be reformed in a certain way while the latter starts the real process of reorganization. This is a position shared by the State Committee on Television and Radio Broadcasting of Ukraine which is a central body of executive power responsible for the reform in its notice of November 14, 2016:

“decision of the Government [adoption of the List] is not a decision on termination of a particular legal entity (Editorial Office) within article 104, 105 of the Civil Code of Ukraine (hereinafter – CCU) but is a legal fact which launches a practical realization of reforming of printed mass media and Editorial Offices included in the List of participants of the first stage of reforming.”

While the decisions on participation in reforming of printed mass media could have been adopted by the founders from the second quarter of 2016 (starting from the fourth month from the moment Law on Reforming of State and Communal Printed Media came into force – as March 31, 2016 was the deadline for submission of the employees` proposals on participation in reforming and its method to the founder) a right of a founder to adopt decisions on reorganization has emerged only after adoption of the Decree and only for the editions included into the List. However, in view of substantial delay in approval of the List this limitation will last only till the end of the year as on January 1, 2017 founders of all printed media subject to the Law will obtain the same right.

As for the methods of reforming of printed mass media founded by state and communal organs there are 4 according to the Law:

As for the procedures of reforming they are dependent on the method chosen by the Editorial Office and particular circumstances such as: belonging to the central body of executive power (hereinafter – the CBEP), existence of a part of state or communal property in the property of the Editorial Office and submission by the employees of the proposal on participation in reforming before the deadline under the Law.

Despite these differences the general algorithm of reforming is the following:

Withdrawal of the public authorities, other government bodies and local self-governance bodies from founders (co-founders) of the Press Media and Editorial Offices. The necessary decisions are to be adopted on the meetings/sessions in case of collective bodies or personally in other cases.

Creation of a new legal entity in a form of economic entity (the most convenient one is creation of a limited company) and, subsequently, carrying out the necessary steps on state registration.

After the previous steps are accomplished the printed mass media is to be reregistered by the appropriate state bodies.

The first step of reforming (withdrawal of the public authorities, other government bodies and local self-governance bodies from founders) is the easiest one as it provides solely for the adoption of a decision on withdrawal and introduction of respective amendments to the State Register. According to subparagraph 2 paragraph 3.2 of the “Decree on state registration of printed mass media” change of the founders is realized through the conclusion of a contract between the founder and his successor. Organizational and legal form of the entity does not change therein.

As for the second method of reforming (with further transformation by the employees of the Editorial Office into the economic entity) it is conducted under the Civil Code of Ukraine. According to article 104 reforming is realized through the process of reorganization which can take form of merger, accession, division or transformation. This process requires adoption of the decision on termination as a result of reorganization, appointment of the Commission on reorganization of a legal entity, declaration and consideration of creditors` claims, drafting and approval of the transfer act and introduction of changes on termination of the previous legal entity and creating a new one into the State Registry.

We would like to underline that paragraph 3 article 5 of Transitional Provisions of the Law provides for the amendments to the “Law on procedures of media coverage of state authorities and municipal bodies activities in Ukraine” which will come into force on January 1, 2019. These amendments will define that official printed editions will be only those used in order to publish normative acts and information defined as necessary for publication by law which does not require creative labor of journalists. As such editions will contain only official acts and will be published by central bodies of executive power they will not be subject to state registration and will be allowed to be distributed without it under article 14 of the “Law on printed mass media (press) in Ukraine”.

With no regard to the chosen method all the procedures dependent on the actions of the founder are to be finished before the end of 2018. If a founder does not submit an appeal for reregistration of respective state or communal printed media before the end of the second stage of reforming it is a precondition to render a certificate on state registration of this media void according to paragraph 2 article 11 of the Law.

According to the initial plan, realization of the first “pilot” stage should have enabled Editorial Offices to be reformed as soon as possible, and during the process of reforming – to identify problems and to prepare the ground for the second stage by introduction of amendments to the Law. However, due to a considerable delay in approval of the List of press subject to reforming on the first stage the logic of the Law was broken and, apparently, despite formal beginning of the second stage on January 1, 2017, the real start of the second stage could be delayed.