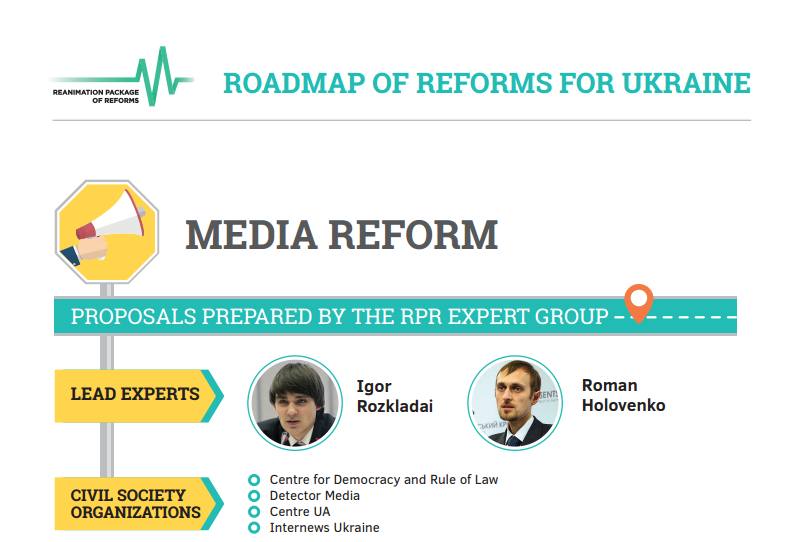 Many years of stagnation and conservation of the Ukrainian media space formed on the basis of an archaic system of state-controlled broadcasting, state and municipal media, and largely monopolized oligarchic business sector of traditional TV, radio and the press have clearly demonstrated the need for a series of reforms during the Revolution of Dignity. Back in 2003, Ukraine made a commitment to replace state-controlled broadcasting with public broadcasting with political, financial, and editorial independence, to conduct «de-statization» of state-owned and municipal printed press, and to implement effective mechanisms of disclosing the information about the actual owners of the media. However, all the attempts to implement the reform have either failed at the legislative level, or have not even been discussed at the parliamentary sessions.

The media reform launched in 2014 allowed to adopt a new Law «On Public Television and Radio Broadcasting» (later amended), the Law «On the Reform of State-Owned and Municipal Media», and the amendments to several laws introducing transparency of media ownership. In addition, a non-democratic institution — the National Expert Commission on the Protection of Public Morality — has finally been liquidated.

The adopted laws have to be properly implemented, in particular, at the level of subordinate regulations. Thus, within the implementation of the public broadcasting reform, the drafts of by-laws regulating public broadcasting are being prepared. Due to the sabotage on the part of the SE «Ukrainian Television Studio Films Ukrtelefilm», the law on public broadcasting was amended to change the procedure of merger of this company. In the course of implementation of the laws on de-statization of press and transparency of media ownership, unexpected issues have arisen. Further amendments shall be introduced to tackle them.

Implementation of these reforms has also demonstrated the need to prepare and adopt a law on audiovisual services, which should replace the outdated law on television and radio broadcasting (2006), as well as the need to review and partly repeal the legislation regulating the printed media. The laws, developed over 10 years ago and outdated even back then, hamper the development of new forms of signal transmission and provision of additional services such as video-on-demand, IPTV, OTT and others. Excessive regulation of the press does not yield any tangible benefits, while a number of requirements for media registration (for example, an obligation to specify the scope of distribution, program objectives, and the expected publication frequency) reflect neither quantitative nor qualitative market conditions.

The role of media during the election campaign should also be reinforced by introducing debate programs, cutting down on the amount of political advertising, and increasing safety of media and journalists. The latter involves restoring the mechanisms of preventing pressure on the media through lawsuits with excessive amounts of «compensation» for moral damages for the criticism of public figures in media.