Results of the Plenary Sessions of the High Qualification Commission of Judges: 66% of the Candidates with Negative Opinions of the Public Integrity Council Still Participate in the Competition

July 17 marked the end of the plenary sessions of the High Qualification Commission of Judges. Within the competition to fill the offices at the Supreme Court, the Commission has scrutinized the opinions of the Public Integrity Council that was in charge of determining whether the candidates meet the criteria of integrity and professional ethics. Following the trend set during the interviews with the candidates, the Commission disregarded most of the PIC’s opinions and allowed 66% of the candidates, vetoed by the public, to take further part in the competition.

In total, 116 opinions of the Public Integrity Council have been submitted for consideration at the plenary sessions. The Commission has concluded that 76 candidates out of this amount can administer justice. It has agreed with as few as 26 opinions of the PIC, having banned the respective candidates from further participation in the competition. Another eight applicants for offices at the Supreme Court have quit the competition voluntarily. Six conclusions were cancelled by the Public Integrity Council itself after it received explanations and additional information from the candidates. 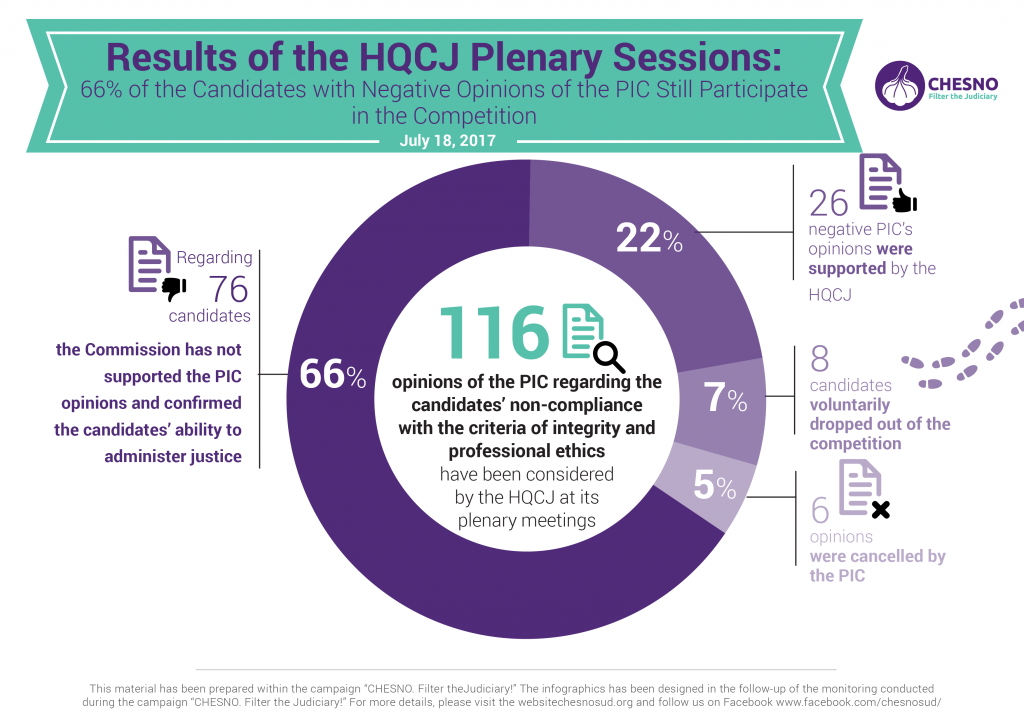 At the same time, notorious candidates Serhiy Stanik and Pavlo Vovk are among those who voluntarily dropped out of the competition for the Supreme Court judges positions. Serhiy Stanik had stubbornly refused to quit the competition despite the well-grounded public complaints and the demand of the Commission to explain certain facts of his biography. In particular, Serhiy Stanik, son of a well-known ex-judge of the Constitutional Court and ex- Minister of Justice Suzanna Stanik, had not declared his right to use six premium cars and could not provide any documentary evidence of his explanations concerning his simultaneous stay in France on a business trip and in Egypt on vacation. Judge of the District Administrative Court of Kyiv Pavlo Vovk filed an application with a request to terminate his participation in the competition on the last day of the plenary sessions, but the Commission has only suspended the process of assessment until National Anticorruption Bureau (NABU) finishes its investigation. In addition, the HQCJ shall also notify NABU and the National Agency on Corruption Prevention about the circumstances which might indicate that Vovk has violated anticorruption legislation. As reported, in the middle of the competition process, on May 26, investigators of the National Anticorruption Bureau searched the house of Pavlo Vovk. At the same time, the judge did not mention this house in his declaration, as it formally belongs to his ex-wife, with whom Vovk has allegedly separated. However, in the morning of May 26, NABU found the judge in that particular house. Searches have also been held at the District Administrative Court of Kyiv.

66% of the candidates whose professional ethics raises concern of the Public Integrity Council continue participating in the competition and have a chance to become judges of the new Supreme Court. Among them, the incumbent Head of the Supreme Court of Ukraine Yaroslav Romaniuk, the judge of the High Administrative Court Yuriy Retseburynskyi, the Head of the Council of Judges and the Supreme Court judge Valentyna Simonenko and several other candidates included by the CHESNO movement in its anti-ranking and recommended to be excluded from the competition. Unfortunately, the fact that Yaroslav Romaniuk has publicly supported the dictatorship laws of January 16, adopted rulings that violated human rights (according to the European Court of Human Rights conclusions) and owns property of illegitimate origin have not been enough for the Commission to suspend his participation in the competition. Neither has Yuriy Retseburynskyi, the judge of the High Administrative Court, been denied further participation in the competition despite the fact that he had violated the human right for a freedom of peaceful assembly and adopted rulings based on the decrees of the USSR instead of the Constitution of Ukraine and the practice of the ECHR. The Head of the Council of Judges Valentyna Simonenko is also running for office despite that fact that she did not mention in her declaration that her husband owns corporate rights for the enterprises located in the occupied territories. The judge herself has visited the occupied Crimea several times, and is also notorious for her statements and actions as the Head of the Council of Judges. In particular, when the competition was already underway, she claimed after the campaigns of civil activists of the CHESNO movement, the Anticorruption Action Center, and the Avtomaidan near the building of the HQCJ that using fake judges’ robes the activists were appropriating the powers of a judge.

Now that the plenary sessions have come to an end, the HQCJ shall go back to work in the form of panels, award points to each candidate for their level of professional ethics, and draw up the final ranking of candidates to the Supreme Court. In the follow-up of the interviews and plenary sessions, 319 candidates have remained active participants of the competition. The professional ethics of 76 of them raises reasonable concerns.