Almost every fourth driver is buckled up by safety belt – such results of all-Ukrainian research conducted by NGO “Vision Zero” and Centre for Democracy and Rule of Law in the context of “For safe roads” Campaign. In that way, according to Campaign`s data 23% of drivers use safety belts. Research was presented on November 14 within the scope of Week of traffic safety which takes a place on November 12-18 in Ukraine.

Research was conducted in October 2018 in 24 cities of Ukraine. Observers worked at the roads in 22 regional centers as well as in Severodonetsk and Mariupol. Research covers over 32 thousand drivers which allow to obtain statistically reliable measures of the actual using of safety belts.

The goal of research was to determine which part of car drivers in Ukraine are actually use safety belts and how far this factor changed during period of 18 months after conduction of the first similar research. Both researches were conducted by same methodology in accordance with advices of World Health Organization – by the method of supervision. 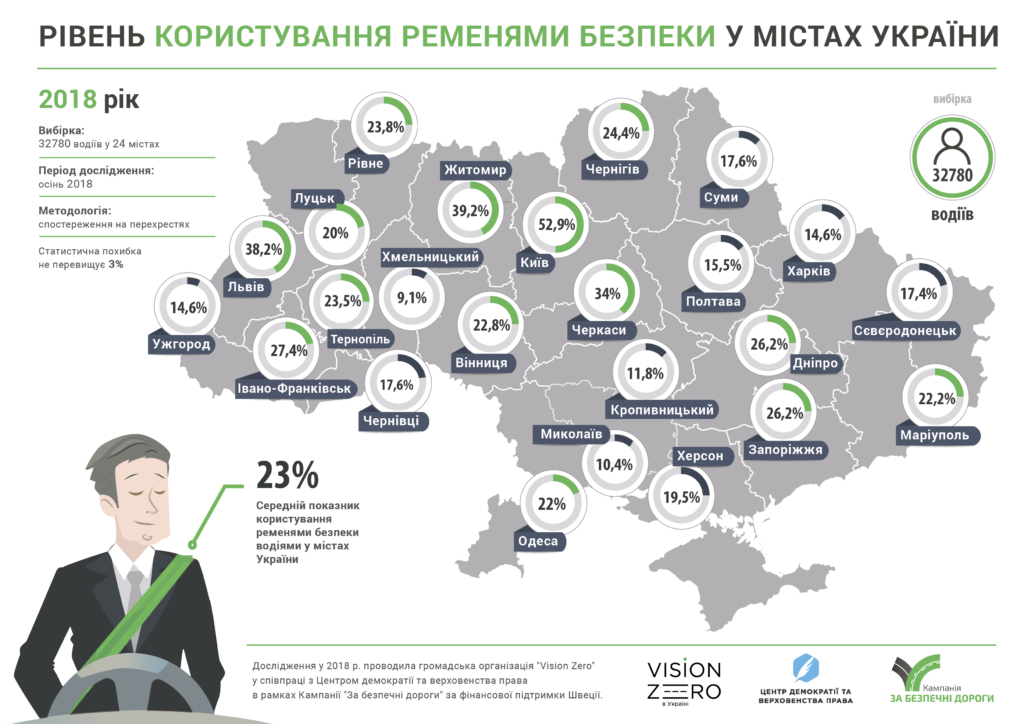 “In comparison with measures of the same research conducted at last year the amount of buckled drivers has raised more than a half from 15 to 23% which according to our opinion is quite positive dynamics. As for the last year the leader is Kyiv where over 50% of drivers are buckled up. However, this year Zhytomyr, Cherkasy and Lviv also approach to the capital`s figures” – mentioned the head of research and co-founder of the NGO “Vision Zero” Victor Zagreba.

Let us to remind that in 2017 the average factor of safety belts using level by drivers at regional centers was 15%. In 2018 six cities has doubled their figures in comparison with 2017. These are Ivano-Frankivsk, Chernihiv, Rivne, Ternopil, Kherson and Chernivtsi

“We connect significant increase of safety belts using first of all with registration of our law-in-draft about increasing of fines and a wave of informational messages in media which it led to. This is just the result we reached after initiating the Campaign “For safe roads”. We are very hopeful that starting from 2018 statistics of mortality and injuries will begin to demonstrate a shortening dynamics. Especially if law-in-draft will be approved as soon as possible” – Taras Shevchenko noted, the Director of the Centre for Democracy and Rule of Law

By the way, in September 2018 Verkhovna Rada at first reading has approved law-in-draft №8492 providing increasing of fine for disregarding the safety belts by drivers as well as all passengers in a car from 51 to 850 Hryvnas. On November 7 the relevant committee has approved law-in-draft to the second reading. The initiator of law-in-draft was a Centre for Democracy and Rule of Law in the context of “For safe roads” Campaign.

During research presentation the representatives of “For safe roads” Campaign has also represented animation clip which dispels most spread myths due to which Ukrainians does not use safety belts. Clip authors are assured that information of citizens and promotion of safety belts are important factors of increasing of safety belts using level.