Transparent finances and stronger regulator: how to free media from oligarchs

Ukrainian television still remains the main source of political news for citizens: it provides information for 73% of Ukrainians. But the TV-space had transformed from the competitive ambience to monopoly. Since 75% of TV-market is owned by media groups. Thus, it is them who decides, what the Ukrainians will see and what messages will receive.

But for the oligarchs the media is not a business, more a social influence tool to protect their financial or political interest as well as strike the opponents. It was prowed during the presidential elections-2019, when the channels openly advertised the politicians, friendly to oligarch or attacked the opponents, leaving the audience without an opportunity to make a fair decision.

Thus, both the experts and politicians raise questions about deoligarchization of media. How to destroy or, at least, suppress the oligarch control of media – to resolve it, Centre for Democracy and Rule of Law held an expert discussion «Deoligarchization in media: how to ensure the independence of media from its owners?». The media experts, officials and representants of political parties participated in the event.

The strict legal regulation, which brings monopolies under control and stimulates market competition – as the participant stressed, these are the means of a media deoligarchization. According to common expert view, Ukraine needs a law changes, similar to United States Antitrust law.

Among these changes must be both stronger control policy for monopolies and media ownership restrictions.

As Taras Shevchenko, director of Centre for Democracy and Rule of Law said, Ukrainian law on media concentration is weak thus needs empowering. “Primary we must define, how many media could be under control of a one man. But it is impossible without a definition: what is a mass media market, how it can be measured and what must be named the concentration and monopoly”, – he stressed.

And on the law basis the government will be able to establish a regulation for media market. One of the ways of it is the cross ownership restriction, when, for example, one person could not own both TV-channel and newspaper.

Director of CEDEM proposes even more radical way, when a one man TV ownership will be forbidden. Thus, media oligarchs will be forced to sell part of a channel to co-owners, thus none of them will be able to command the media in manual mode. But expert aware  that this decision could cause the extinction of the TV-channels, since it’s hard to find a buyers for non-profit active.

It is Antimonopoly committee of Ukraine (AMCU) who is directly responsible for the protection of free economics competition. But, as Agia Zahrebelska, former AMCU representative, remarks, by now we practically have no antitrust law, and this allows the businessmen to concentrate notable part of media market in their hands.

As Agia Zahrebelska stated, the fines are neither working. “We can fine a TV-channel in amount of 5% from their income. But they have no profit”, – she explained.

Nevertheless, in addition to antitrust law, the transparency of media funding is a strong measure. Thus it shows, “who owns the news” and allows a reaction on violations.

“The finances is the other important issue. In many countries TV-companies make the financial reports for regulatory body. It`s frequently compared with the bank system where the subjects have to provide information to National Bank”, – Taras Shevchenko stressed.

It is the financial accountability which will provide an order on mass media market, mentioned Svitlana Ostapa, NGO Detector media. Thus Parliament of Ukraine have overseen the bill on giving a TV-channels a several years to reach a zero balance. “In case of remaining unprofitable they would disappear – or the owners had to show where they got money to support the channels” – she stressed. Svitlana Ostapa express a view that media owners lobby in Parliament blocks these initiatives and urged to fight for their adopting.

But while TV channels have to name their owners because of the law, the online media still are in shadow zone. While they are the source of information for 50% of Ukrainians, thus having impact on social agenda. According to Oksana Romanyuk, executive director of Institute of Mass Information, only 7 of 50 most popular Internet media aren’t hiding the information about the owners and editors in chief. As a response, the expert urges to allow the registration of online media (by now it is not possible in Ukraine).

“We developed a bill which proposes a voluntary registration of Internet media, while they will be obligated to keep the balance and work in transparency”, – expert explained.

Strong regulator and Public broadcaster as a competitor: how to impact the media market

For Ukrainian TV audience the oligarchic control in media means not only a lack of competition but also a manipulations in daily news. According to the monitoring data of Detector Media NGO, only during the previous week 7 private channels have aired 101 TV-story with the signs of being pre-ordered. It is the National council of television and radio broadcasting which must react for the violations. But, as Centre for Democracy and Rule of Law stated, now we have a number of obstacles in regulator’s work. Thus it needs to be empowered, including the additional sanction powers.

“By now, Ukrainian regulator body is weakest in Europe. We need strong, independent and competent regulator. As well as we need the law on audiovisual services. And we ought to focus on internet media primary since here we have a fog and a savage zone”, – remarked Oksana Romanyuk.

As Ihor Rozkladai, lawyer of the Centre for Democracy and Rule of Law stressed, now the regulator have an obvious need of a new powers for effective work. But the risk must be taken into account: the strong regulator could become a politically engaged body. Reminding that the members of National Council are appointed by President and Verhovna Rada.

Regulator really have insufficient powers – claims Uliana Feshchuk, member of National council for television and radio broadcasting. “During the two last years we are willing to have a new edition of the law [On National council on television and radio broadcasting], because the previous one is like using a shovel while others work by tractors. But the changes are blocked, because the MPs are afraid to transform the Council into a punishing measure”, – she remarked.

Thus, the representant of the National Council hopes that Verhovna Rada will forbid the TV ownership for offshore companies and persons, and the regulator will be able to obtain information about owners abroad. The separate problem are the fares: the amount of fare is 5% of the licence cost and for big media holding companies it is the best way to just pay without disclosing the owners.

The National Council is also ready to regulate Internet media, but under some conditions. “It will enlarge our field of work and for this transparency must be rational. We need additional staff, and while there are lot of covert schemas, we have to make a serious analysis”, – added Uliana Feshchuk.

At the same time, it is the economic competition which can be a measure against television monopoly. Thus, the public broadcaster have to compete with private channels for audience. Since if the public broadcaster will provide fair and quality news, ir will engage at least part of viewers, disgusted by manipulations.

Instead, Roman Vybranoskyi, the chairman of the reform communications branch in Ukraine Crisis Media Centre, proposed to help the private media, which will keep finance independence. According to him, the monopoly of 1-2 media is also possible even in the regional centres and they also can use manipulations – for example, campaigning against reforms. “We must help the media on the regional level to make them a service with corresponding level of quality”, – expert stated.

By the way, it was him to propose to spend the money, budgeted for the “media coverage of government actions’ for the support of the quality media.

National Council in a new mode and restrictions for the channels: what do the candidates propose

Whether the real deoligarchization of media will be carried out in Ukraine – the answer to this question depends as well from the next Verhovna Rada of Ukraine, since the elections will be held on July 21. The promise of bringing down the oligarchic influence in media is in fact included in programs of, in particular, The Servant of the People and the Holos parties. Thus, the candidates of both parties took part in the discussion.

Thus, Mykyta Poturaiev, the candidate of The Servant of the People party agreed with expert statements and also supported the strengthening of the National Council, which will react for violations. The politician proposes to rise the budget of regulator and broaden the staff. At the same time, the candidate wants to change the nomination.

«Surely, we need an independence from the politicians. The quota mode must be left in the past. I won`t say that I have a final response but I support the open competitions format [to appoint the National Council members]. We must have a selection under defined criteria to have a new experts”, – politician proposed.

At the same time, Mykyta Poturaiev sees a transparency as an instrument to battle oligarch influence on media. According to his speech, it means generally the disclosure of the money sources and a mechanism to check, from where TV-channel receives funding.

The other politician, Olexiy Sivirin, the candidate of The Holos party, sees manipulations, the partisanship of the channels as well as their concentration in monopolists` hands as key problems.

And according to politician, it is the co-regulation to be the best solution. In this scenario, media and government must apply a common code on ethics standards in mass media

Instead, the TV-market itself can face the strict government regulation. The example for it will be the National Bank actions in financial sphere, already mentioned. Additionally, the candidate proposed to forbid the TV ownership for politicians and officials.

“We thought about special regulation. If organization is not aimed at receiving profit then the government is not obliged to see it as business structure”, – stressed Olexiy Sivirin.

Thus, the unprofitable TV-channels can face sizeable sanctions: from the restrictions on information broadcasting and to losing of the license

The expert discussion was only a start of broad debates on deoligarchization of media, thus the work will go on.

The event was enabled with the financial support of Sweden 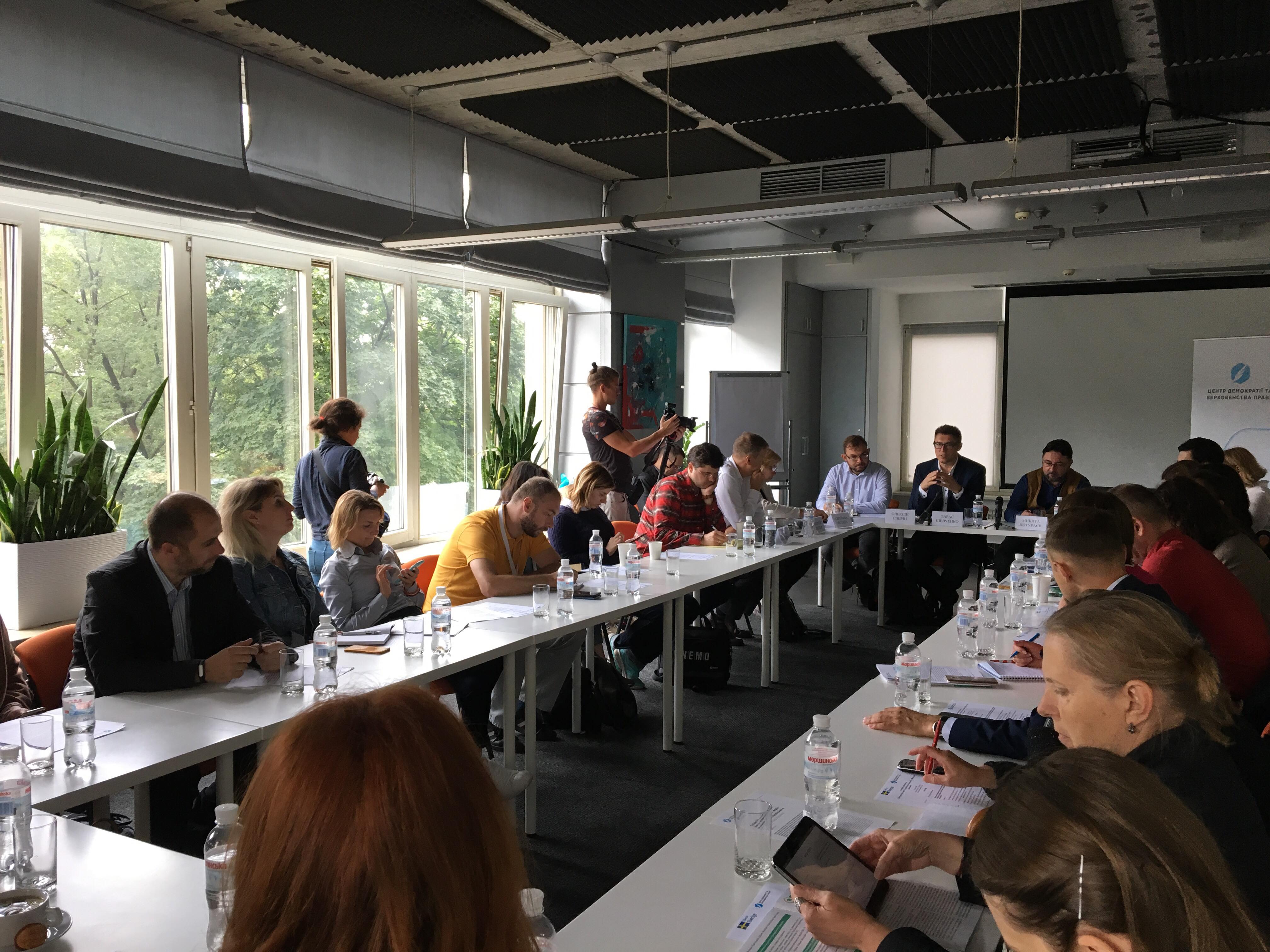 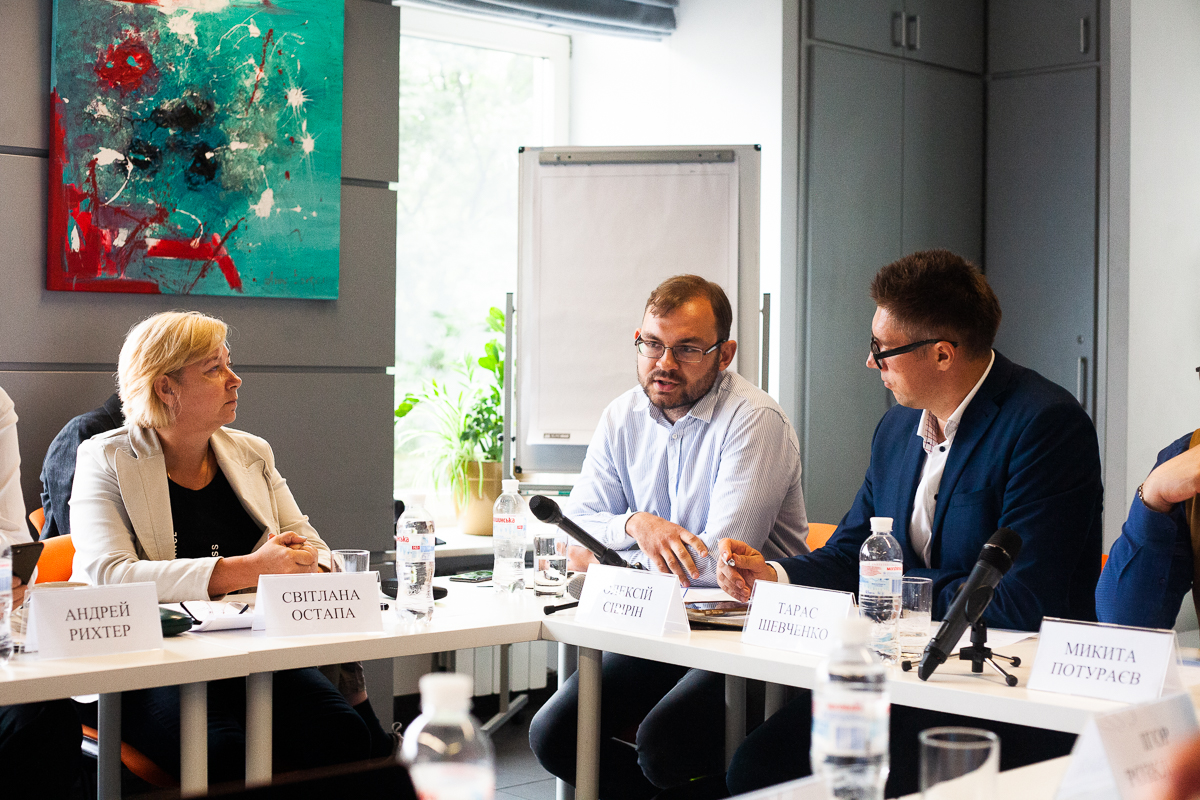 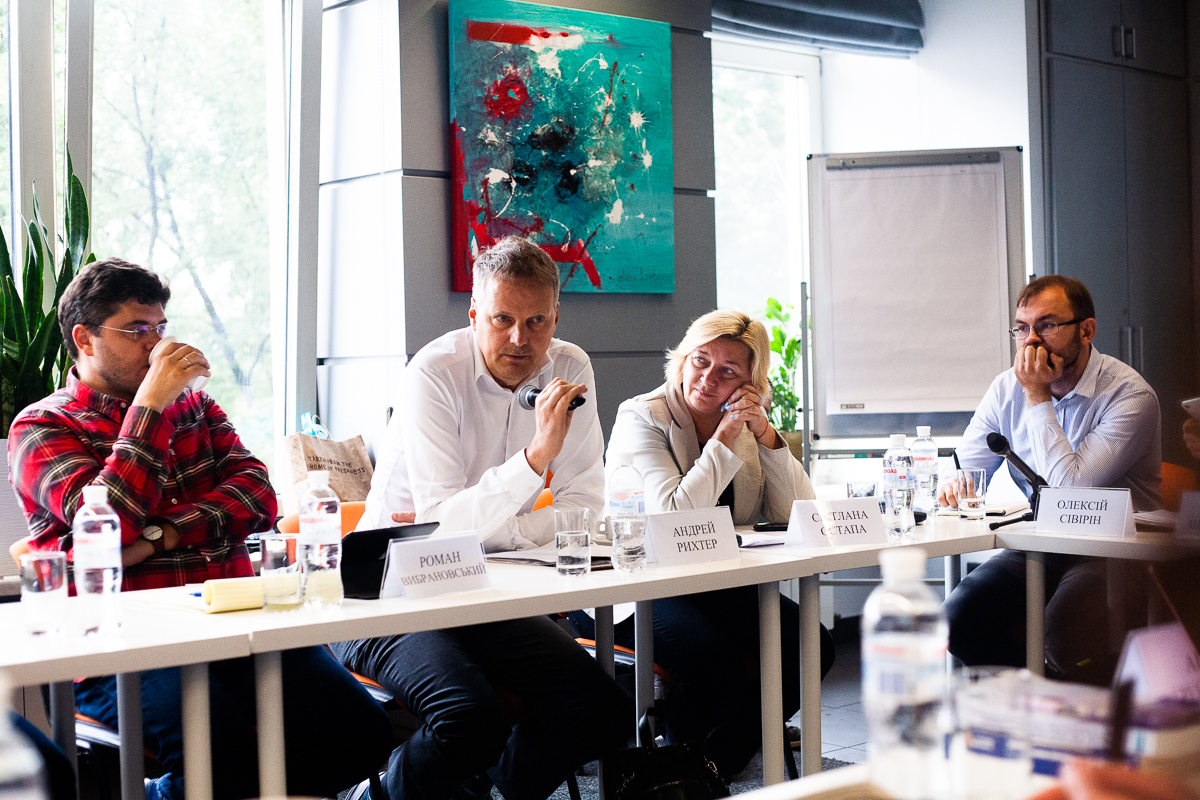 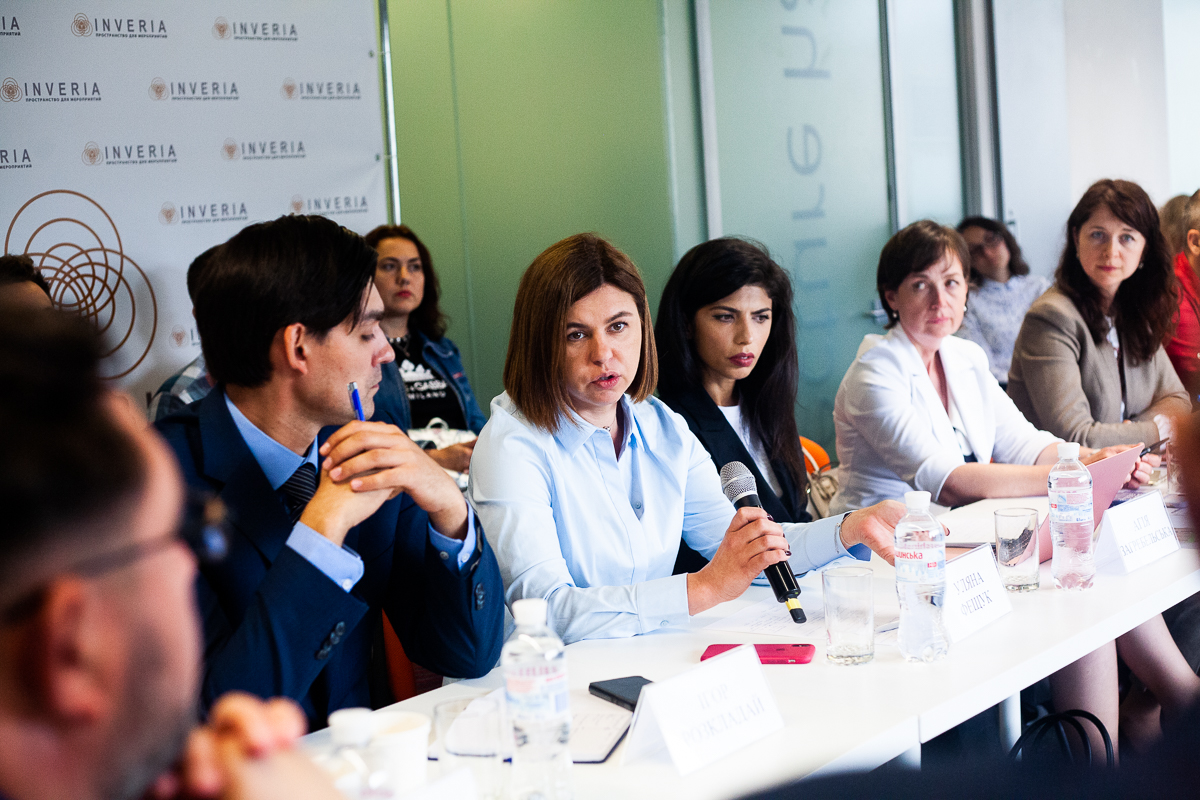 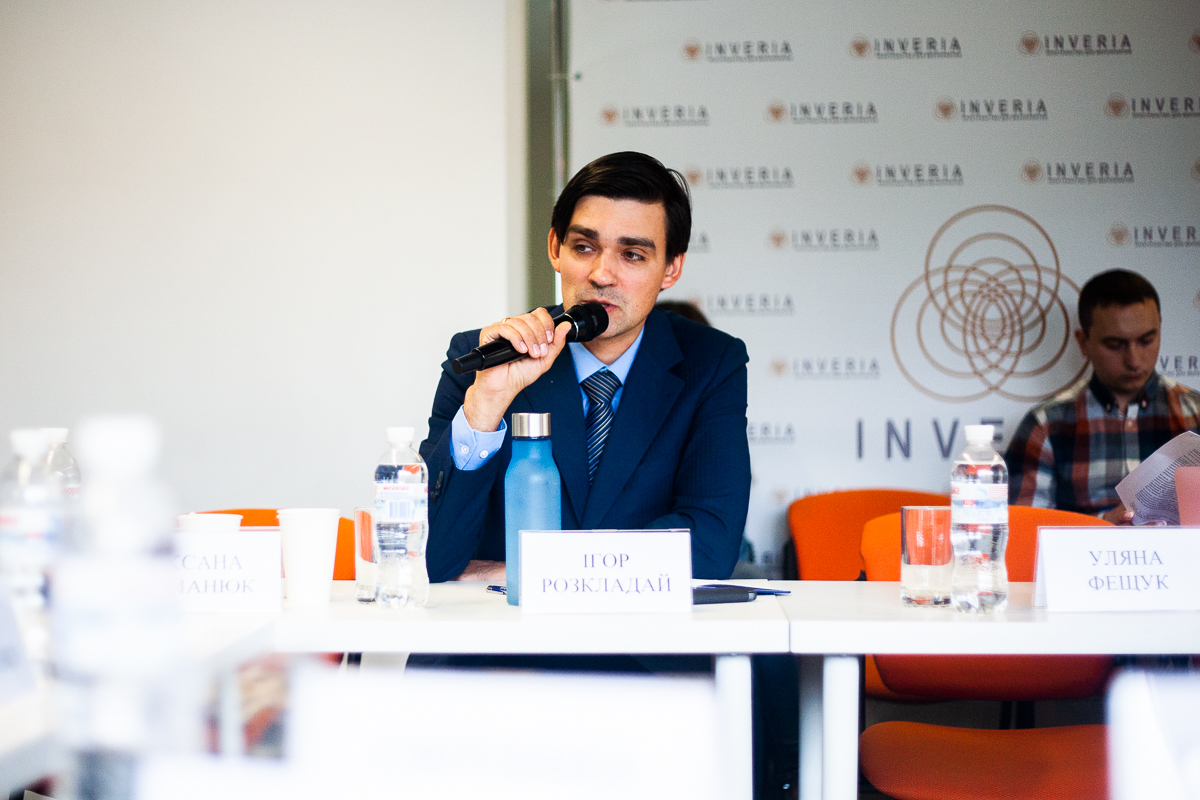 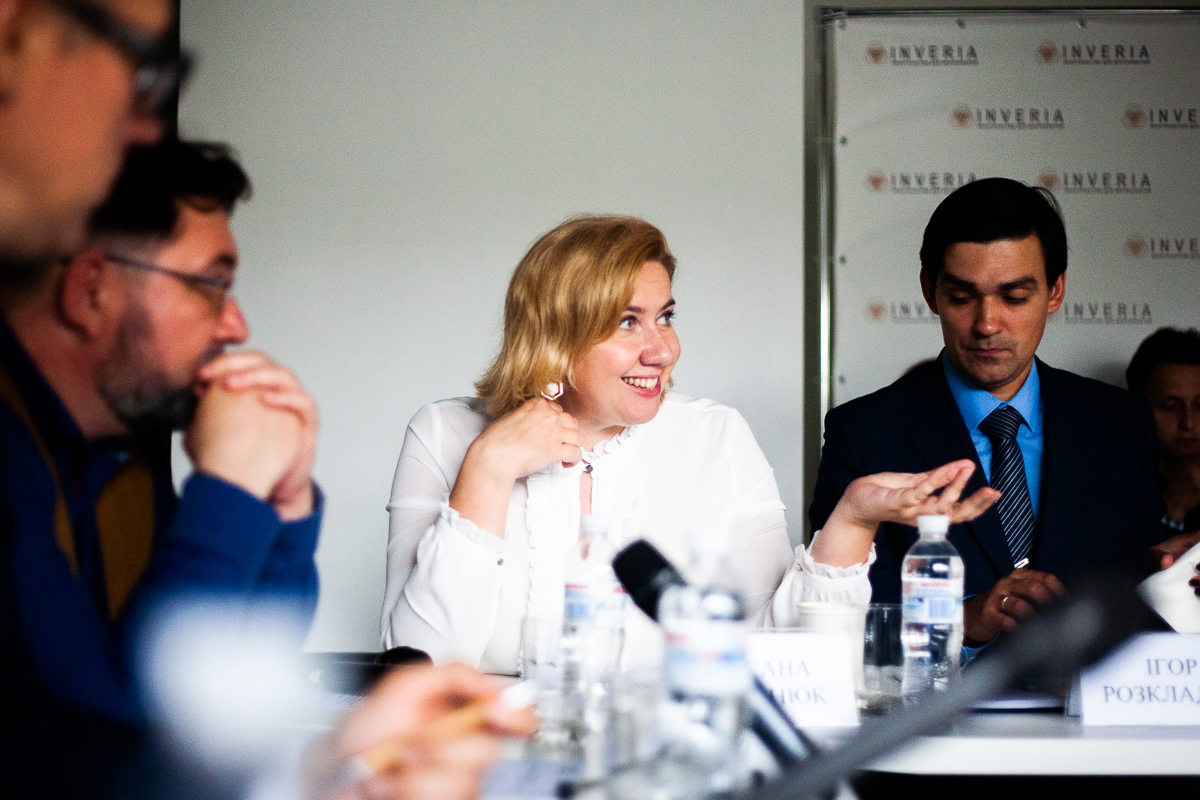 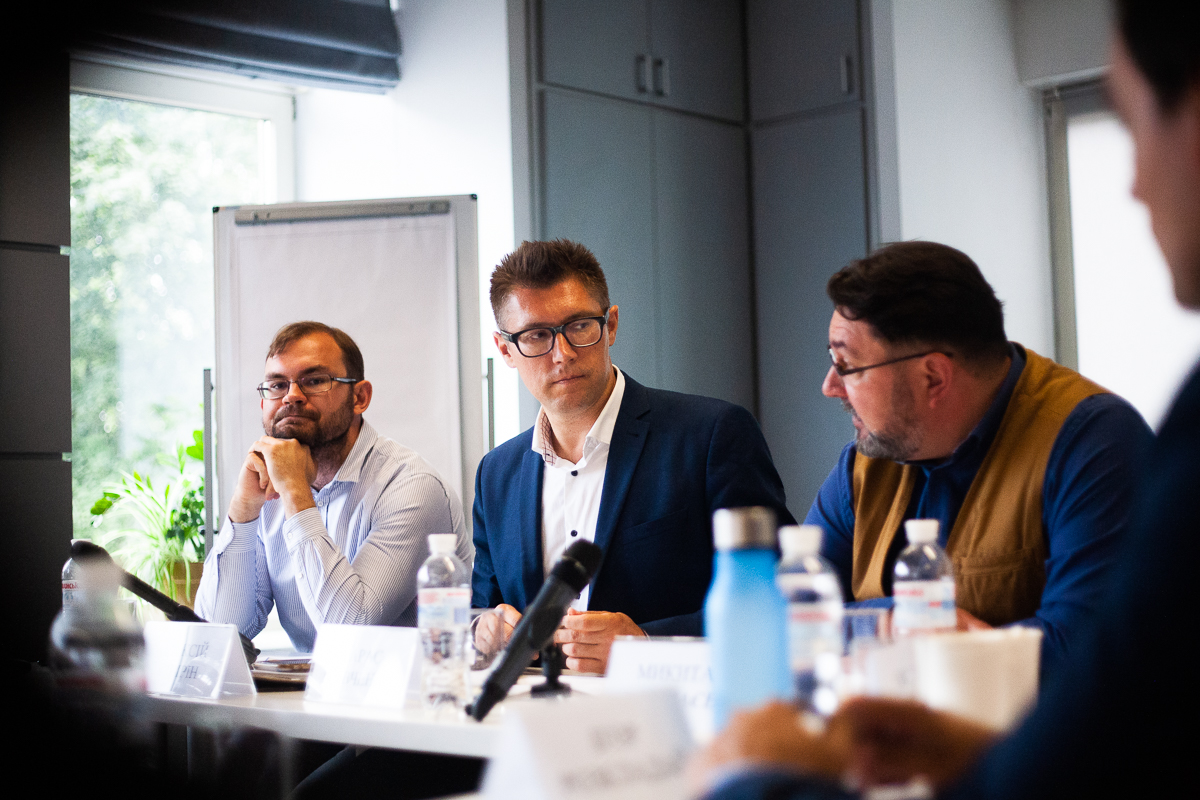 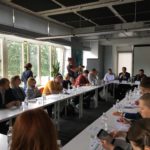 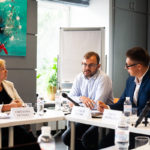 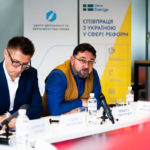 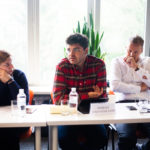 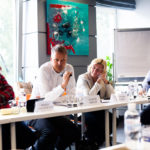 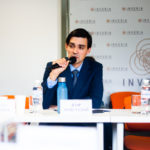 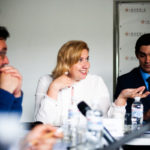 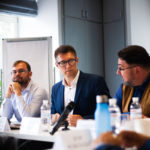