“Our treason is not the worst”: discussion meeting with Stanford graduates from CEDEM 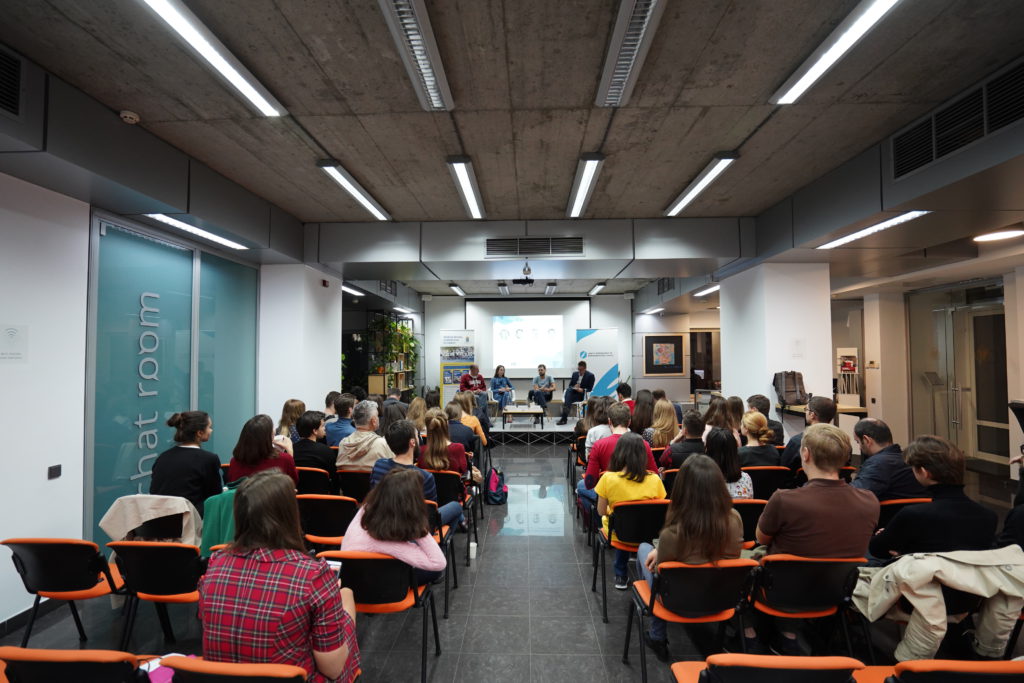 On September 24, an inspiring discussion with graduates of The Ukrainian Emerging Leaders Program 2017-2018 of the Centre for Democracy, Development and Rule of Law at Stanford University, organized for the community of NGO participants in the resuscitation reform package, took place. The Centre for Democracy and the Rule of Law held a meeting to exchange experiences and insights, so necessary in the democratization of Ukraine. In the event, Aleksandr Matviychuk, Chairman of the Board of the Center for Civil Liberties, Dmitry Romanovich, economic expert and Alexander Starodubtsev, founder of ProZorro, shared their experiences. 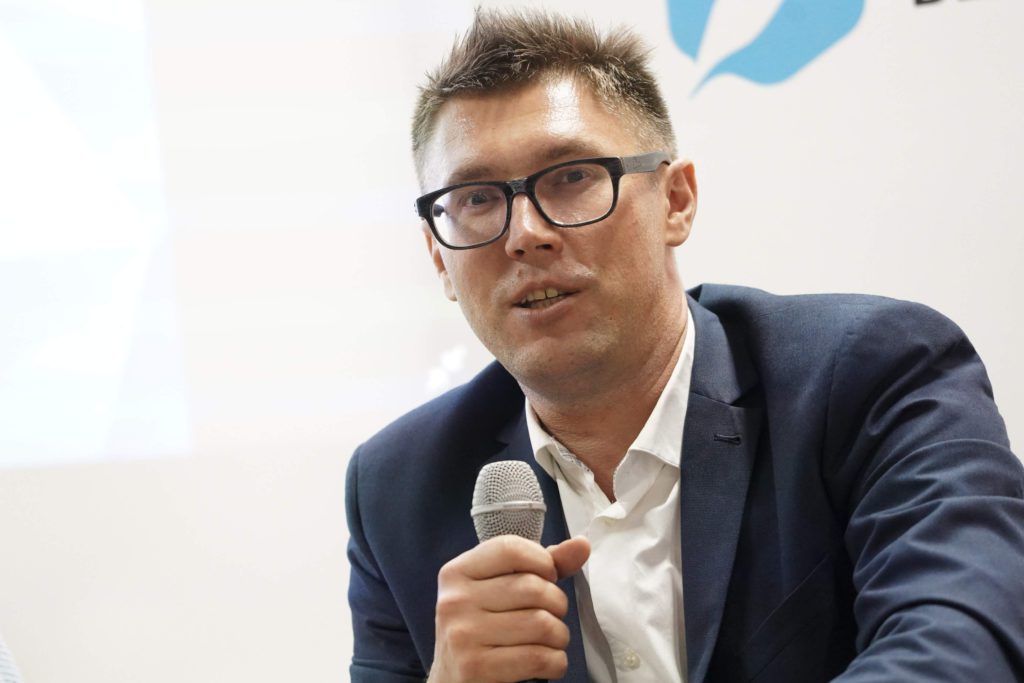 The meeting with Stanford graduates was moderated by Taras Shevchenko, Yale University graduate, director of the Center for Democracy and the Rule of Law. He stressed that such exchanges of experience are important primarily because of the opportunity to look at familiar things from a new perspective, to receive a boost from other values and visions.

Answering the question what Stanford did exactly change, Dmytro Romanovych noted that he returned more optimistic, and also realized how Ukrainian-centric we are. “It often seems to us that our betrayal is the worst one, but the world is very large. And in the cases I’ve studied, I understand that we are not so bad. For example, in Latin America, during the elections in Mexico, which were almost the first in the entire history of independence at the same time, all elections were presidential, parliamentary, local, mayor, etc. So, over the period of the elections campaign, more than 300 candidates for various positions were physically killed in 6 or 9 months. And after that, it’s not Ukraine to say that everything is very bad.”

Oleksandra Matviychuk told that the change for her occurred in her personal work. After all, this is a constant extinguishing of fires in human rights, and since Euromaidan there was a feeling of a huge marathon, and this does not add optimism: “I returned with the feeling that yes, someone needs to extinguish these fires, but it is important to finally concentrate and repair this wiring, which sparkles and causes these fires”. 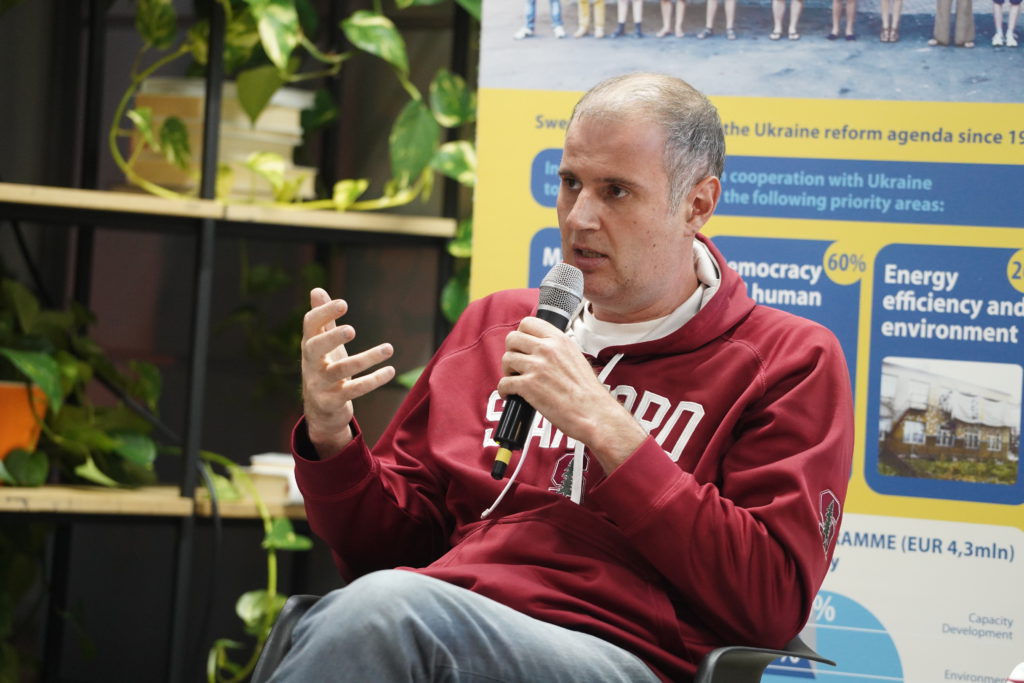 Oleksandr Starodubtsev, reflecting, said that he returned more commitment-minded, because when you work in your reform, you fall out of a common understanding of the processes. “Stanford made me a worldview frame. Thanks to Frank Fukuyama and other professors and courses, I began to understand what was happening and why the reforms were going on for a long time, it was difficult, what we needed to prepare for and what was waiting for us next.”

Continuing the conversation, Taras Shevchenko asked to share the main insights that the participants in the discussion obtained at Stanford. In this section, Oleksandr Starodubtsev focused on such insights:

1) Business is easier to build than a state, because you cannot change a customer. The company may exclude retirees from target audiences, but the Ministry of Social Policy can’t.

2) The state is harder to build due to the severity of measuring success. The unsuccessful company closes, but with the Ministry of Economy, which does not earn money, nothing happens. Also, the state is much more complicated and bigger system than any business.

3) If we compare democracy and bureaucracy, then the last problem is more of a problem. Indeed, the world lacks capable states, high-quality bureaucracies that provide sufficient services and regulation. It takes a long time to build a capable state in democratic conditions: gradually improving institutions, we are talking about institutionalization marathon.

4) For the 4 years of actual independence, Ukraine stopped the aggressor, won visa-free access, improved transparency, got off the gas needle – in other countries it happens in 10-15 years. And we must remember that we are going well. The system needs to bend, but not break, because this kind of institutionalization does not work.

5) According to Francis Fukuyama, there are two ways to reform the bureaucracy in democratic conditions. The first is to control, increase pressure, rules, and procedures for officials. The second runs through culture – giving officials direction and authority so that they can, at their own discretion, embody the changes. Now we are focused on control, but we need to shift the emphasis towards culture so that in 20-25 years we can build a normal state. 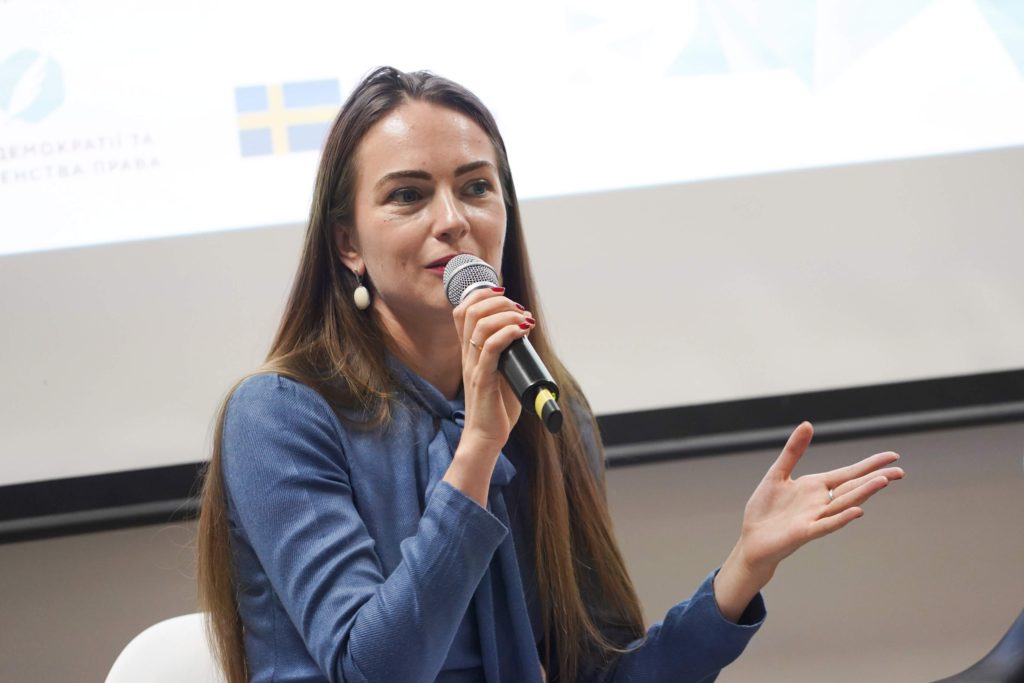 Oleksandra Matviychuk noted that for her studying in the USA and a trip to Stanford was not an end in itself, but became an opportunity in a transforming atmosphere to reflect on previous activities and work out a further strategy. Oleksandra also emphasized that her studies at the Ukrainian University, where she studied law, lacked syncretism. At Stanford, there was an opportunity to engage in communications, psychology, design thinking, law, and political systems, and this all together allows us to go beyond the limits with which we limit ourselves in our education or work. The third important lesson was the in-depth study of case studies of foreign experience, which shows that the banal adoption of foreign recipes and decisions does not work, they need to be customized for each country.

The last thing Oleksandra decided to share was that the Stanford program participants had the opportunity to study Ukraine: hourly conversations with Ukrainians, which are difficult to catch in Ukraine: “Suddenly, for myself, I destroyed one myth, of which I, too, was a participant and creator. This myth about the power of Ukrainian civil society. Of course, I don’t want to belittle the results of the work of colleagues. The fact is that we are powerful, but scattered, because everyone works in a very narrow niche. We cannot build one platform, at least a communication platform, adopt a consolidated agenda that would include various issues of public life and impose it on all political parties, that go to power.” 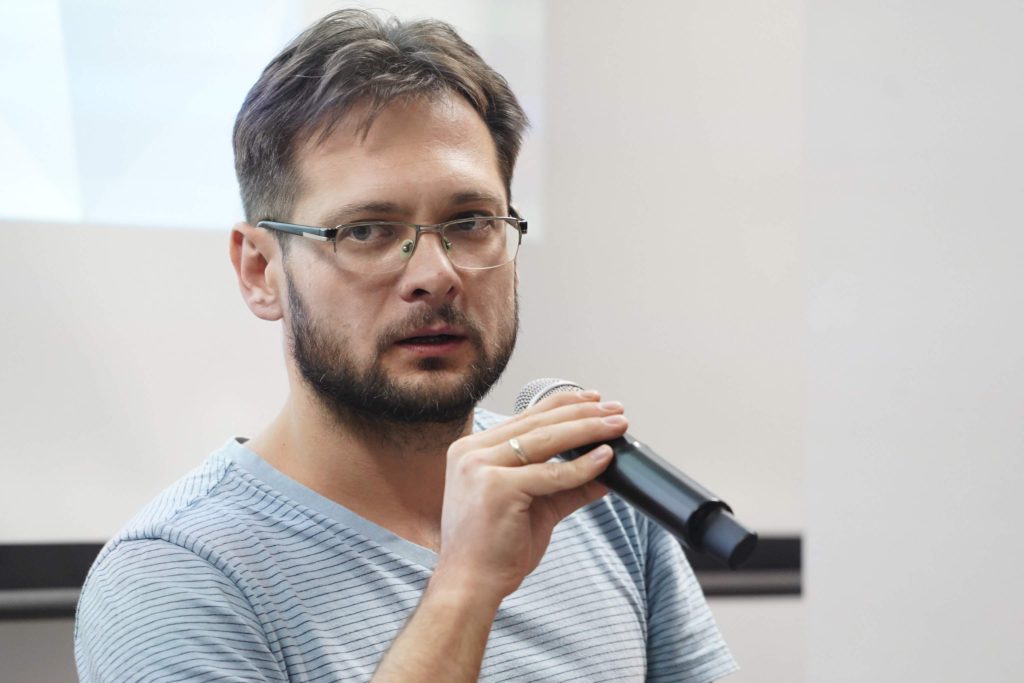 Dmytro Romanovych told about his experience of the first lesson on populism, during which he realized that the problems that we consider only as our own are global and we are really too focused on ourselves. Another important experience for Dmytro was the repeated relive of Maidan at Stanford, thanks to the presentation of the Marci Shore’s book on Maidan and the Canadian Immersive Theater, which reproduced the events of Euromaidan in collaboration with the public. So, Dmytro stressed: “It is understood that in Ukraine we need to reflect on the Maidan, to accept this, because we are all injured. And to feel that we are who we are, what we have done, somehow evaluate it.”

Regarding the training insights, Dmitry noted that he did not agree with Oleksandr Starodubtsev on the bureaucracy. But, as an economist, he believes that Ukraine needs two things. The first is economic reforms, because “the economy feeds the rest of the movement, finances all other reforms”. The second thing that Ukraine critically needs is a developed private sector: “It is important to create competition, create a field, deregulation, privatization, the land market, in order to build the private sector. He will have a real request for the rule of law, for an effective bureau card, for government services”. Political reform related to political parties, political advertising, and electoral reform are also very important. 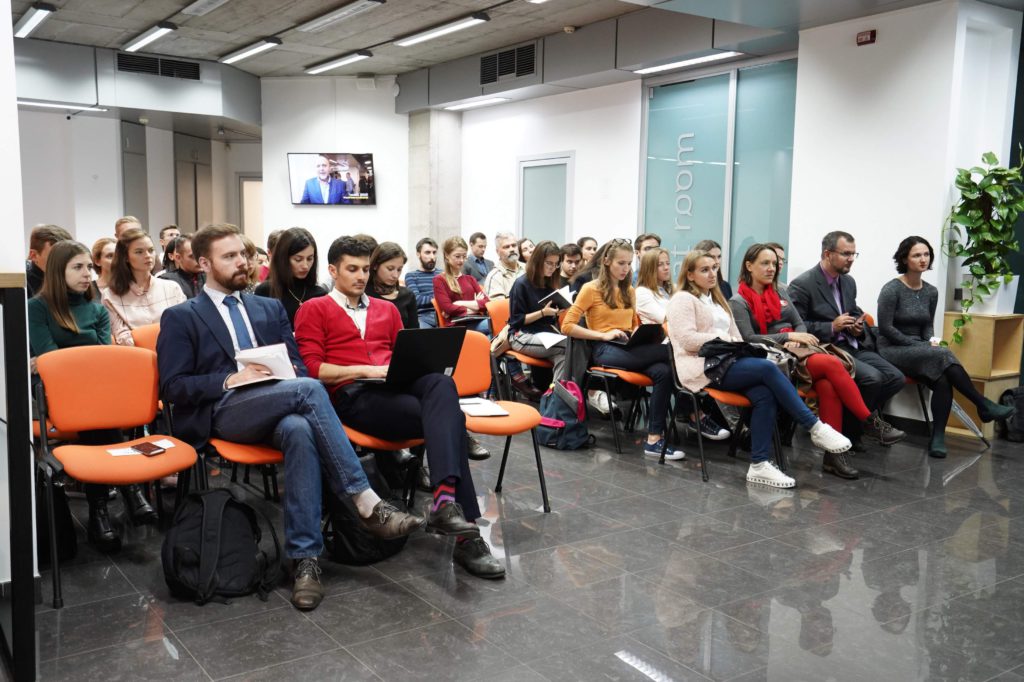 Taras Shevchenko urged the speakers to share recipes for solving problems they identified. Oleksandra Matviychuk noted that the problem of uniting civil society is too voluminous for a panel discussion, but tried to make separate sketches. In particular, the percentage of active citizens has not changed over the past 5 years, and the changes that we see are the result of the fact that 8% of active citizens who were previously involved in civil initiatives have become three times more active. Therefore, it is necessary to gradually attract people who have never before engaged in social activities, so that there was someone to replace the modern layer of leaders.

“In my opinion, we lack an ecosystem, infrastructure. I don’t believe in unification through memorandums. They unite in actions and work. On the Maidan, on the barricades, people also united for the sake of purpose. We would like us to unite not only from an existential threat, but to think in advance and build an ecosystem,” concluded Oleksandra.

Taras Shevchenko summarized that the main issues in the discussion graduates of The Ukrainian Emerging Leaders Program identified the economy, effective bureaucracy and civil society unions that would prepare the generation of reformers to replace themselves and work out in the field of communication beyond the comfortable social circle.

This event is enabled by the financial support from Sweden