Freedom of Expression in Times of Conflict: Ukrainian Realities 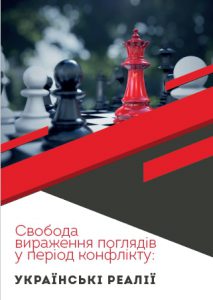 The last three years of the conflict with Russia, accompanied by complex transformation processes, geopolitical reorientation, human losses and sometimes – controversial reforms, became for Ukraine a difficult challenge.  Dialectical and hybrid nature of the threat considerably complicated the search for effective and proportionate response mechanisms.  This report appeared as an idea to show the importance of freedom of expression in times of conflict, when access to some state’s territories and truth remains restricted.  The report highlights the interrelation between the conflict in Donbas, annexation of Crimea and respect for freedom of expression in Ukraine based on the comprehensive analysis of the international legal standards, national legislation and reports of international human rights organizations.

You can read the analytical report here.