Since May 2016, the Verkhovna Rada staff and civil society organizations-members of the Open Parliament Initiative has been developing the Communication Strategy for the Parliament. 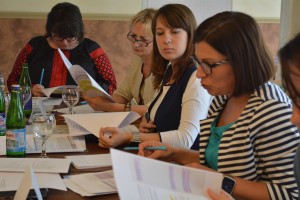 During dedicated strategic sessions, held in May and July 2016, the strong and weak points of Ukraine`s Parliament communications with external audiences have been defined first. With a view to make this interaction more efficient, participants started elaborating relevant recommendations.

The weak points include, in particular, lack of systematic planning, monitoring and capacity assessment in the parliamentary work, as well as insufficient level of internal coordination between the Verkhovna Rada divisions.

«Staff planning of foreign visits of the parliamentary delegations is handled via correspondence, without departmental meetings, to give an example. Different staff branches and committees send their own proposals on the trips. Yet, this is a good practice example, because they form a unified document – Indicative Plan of International Exchanges – and this way of coordination isn’t widely used in the Parliament», – explains Tetiana SEMILETKO, CEDEM program director, who contributes to the Communication Strategy development.

Lack of internal coordination and situational responsiveness while interaction with the international community and mass media entails poor understanding of the Parliament’s role in the state governance agenda with insufficient knowledge about its achievements.

Considering this, participants of the Open Parliament Initiative are preparing a complex document, which will set out the strategic goals, indicators of changes and recommendations for making Parliament`s communication with the public, press and international audience more efficient and systematic. The proposed strategy will also include blocs devoted to the internal interaction and branding of the Verkhovna Rada of Ukraine.