Over 5,000 judges in one database: CHESNO. Filter the Judiciary! presented the profiles of all Ukrainian judges

There are more than 5,000 judges in the Ukrainian judicial system – from now on, citizens can find information and check the integrity of each of them in the online database of profiles from the campaign CHESNO. Filter the Judiciary! On December 22, the campaign team presented an open platform with information about all the “servants of Themis”, and in general, the database of profiles has been operating since 2016, and campaign analysts supplemented it with at least 100 references about judges on a monthly basis.

“The start time of this campaign [June 2016] was very symbolic, because it was when one of the key stages of the judicial reform was launched: amendments to the Constitution and a new law on the judiciary and the status of judges, and we joined the process. We set a goal: to form a base of judges. We realized that “CHESNO. Filter the Judiciary!” would be a campaign to monitor and control the implementation of judicial reform. And the goal was to clear the judiciary of dishonest judges so that justice would be fair,” said Olesia Kholopik, director of the Centre for Democracy and Rule of Law. 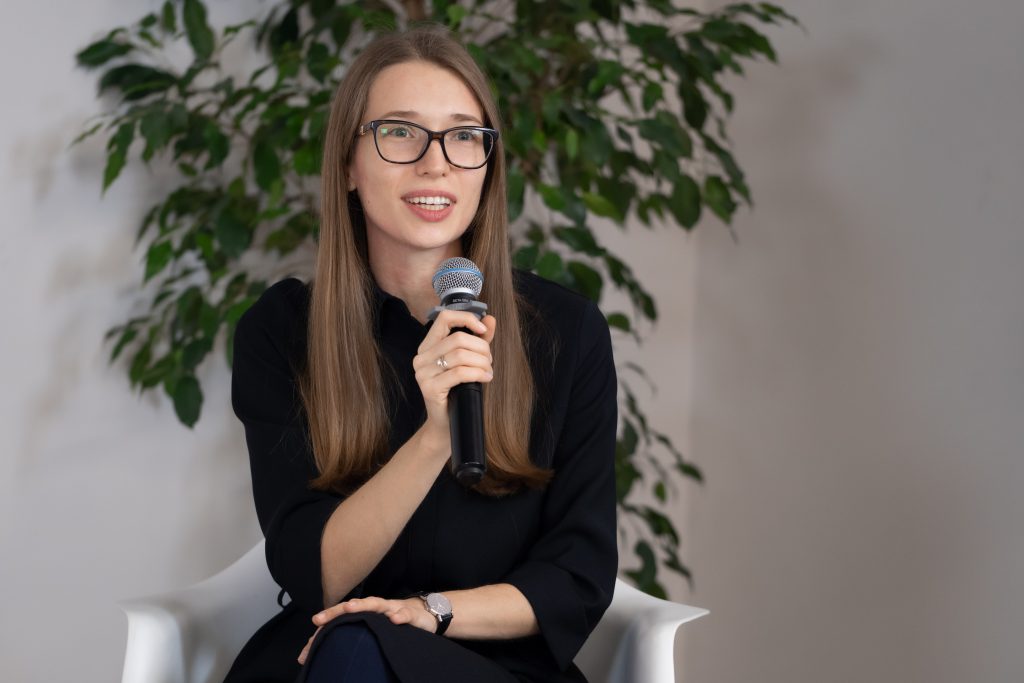 Therefore, for the next four years, the participants of the “CHESNO. Filter the Judiciary!” collected information about judges and systematized it into profiles – a kind of “portraits” of the “servants of Themis”. Currently, the database of profiles is a “judicial encyclopedia” with information about 5,261 “servants of Themis”. It can be used by anyone interested in the judiciary: journalists, activists, lawyers and judges themselves. 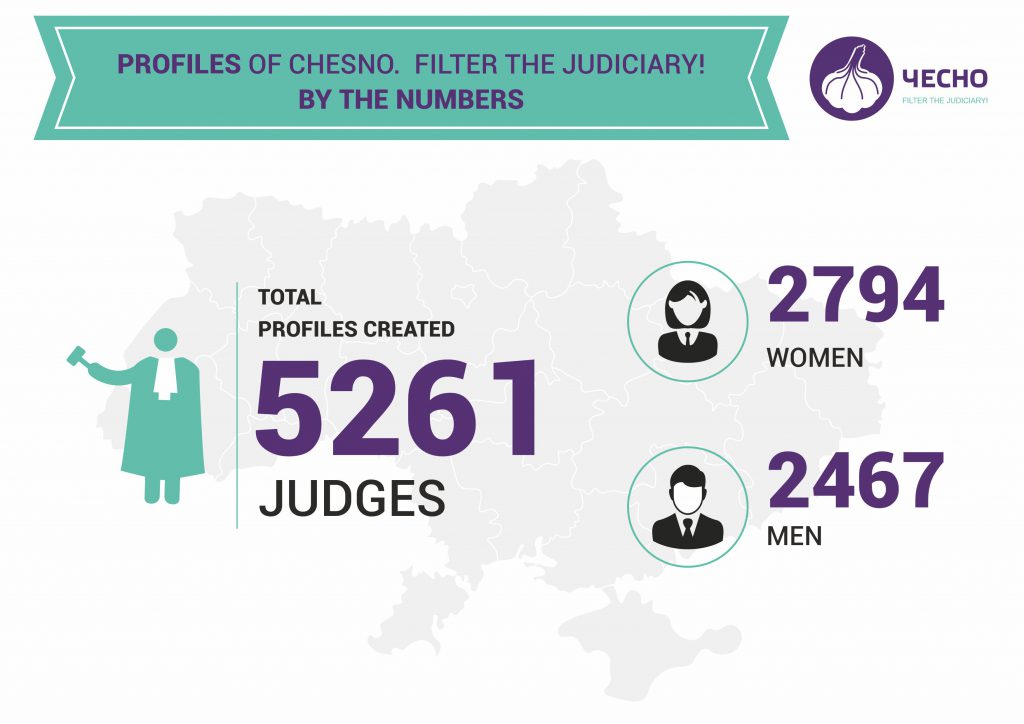 Database of Profiles “CHESNO. Filter the Judiciary!” see them by the link

“This campaign should ensure people’s right to information, the right to know who the judge in their case is, and at the same time see how serious the problem of dishonesty of judges is,” said Ivan Piatak, a legal adviser to the campaign CHESNO. Filter the Judiciary!

The project was worked on by campaign analysts and lawyers in Kyiv, as well as regional coordinators in 23 regions of Ukraine, who studied local judges and briefed their communities on judicial reform ideas. During the presentation, coordinators Serhii Yatsyk (Zhytomyr Region) and Vitalii Svitlyk (Ivano-Frankivsk Region), Kateryna Dvornichenko (Dnipropetrovsk Region), Alona Bereza (Khmelnytskyi Region) and Anatolii Stoian (Kirovohrad Region) shared their experience in monitoring access to justice on the ground. 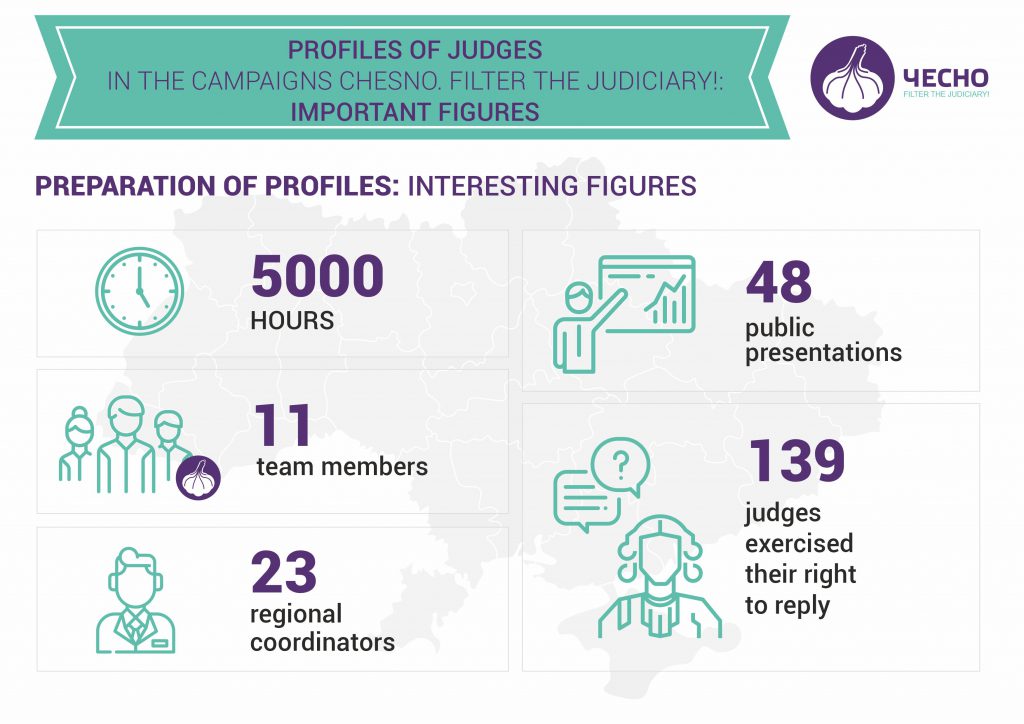 The main criterion by which judges were evaluated was integrity. The campaign’s experts developed 5 of its criteria – non-engagement in corruption and crime, transparency of wealth, non-involvement in human rights violations, adherence to professional ethics, non-participation in questionable decisions. If a judge violated at least one of them, the judge was marked “unscrupulous”, and in the profile this judge was marked with black garlic.

Also, each judge’s profile contains a short professional biography that will be useful to journalists, activists or litigants. This way they will be able to find out where the judges studied, where they worked before, whether they have relatives in the judiciary, whether they have considered high-profile cases (for example, about the nationalization of PrivatBank) and what assets and property they own.

This information was collected by analysts from open sources only: declarations of the judges themselves, open registers, court rulings. Here, readers will also have access to the judge’s declarations and links to media materials about the judge.

“This database is used not only by public activists and journalists, but also by lawyers and even judges themselves. We received feedback that sometimes judges of higher instances would look up information about their colleagues in our database when they received some cases,” added Olesia Kholopik.

According to Liudmyla Slyva, coordinator of the campaign CHESNO. Filter the Judiciary!, there were a lot of judges that did not meet any of the integrity criteria. 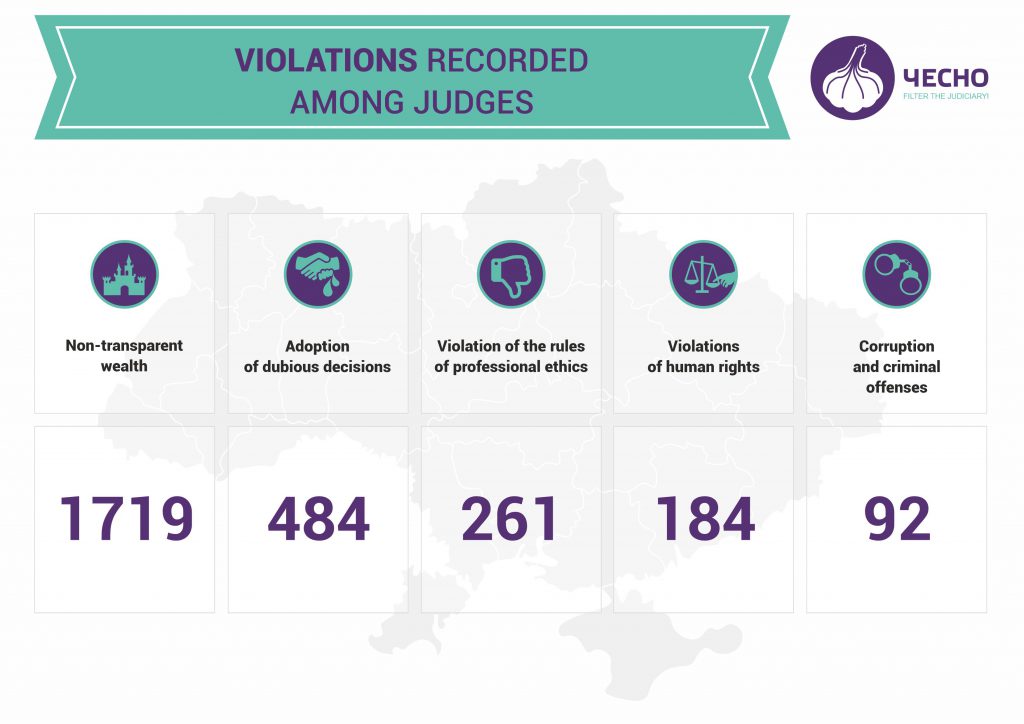 Note that during the process of filling the profile database, the participants of the campaign CHESNO. Filter the Judiciary! presented it in all regions of Ukraine, giving the citizens information about the judiciary in their region. 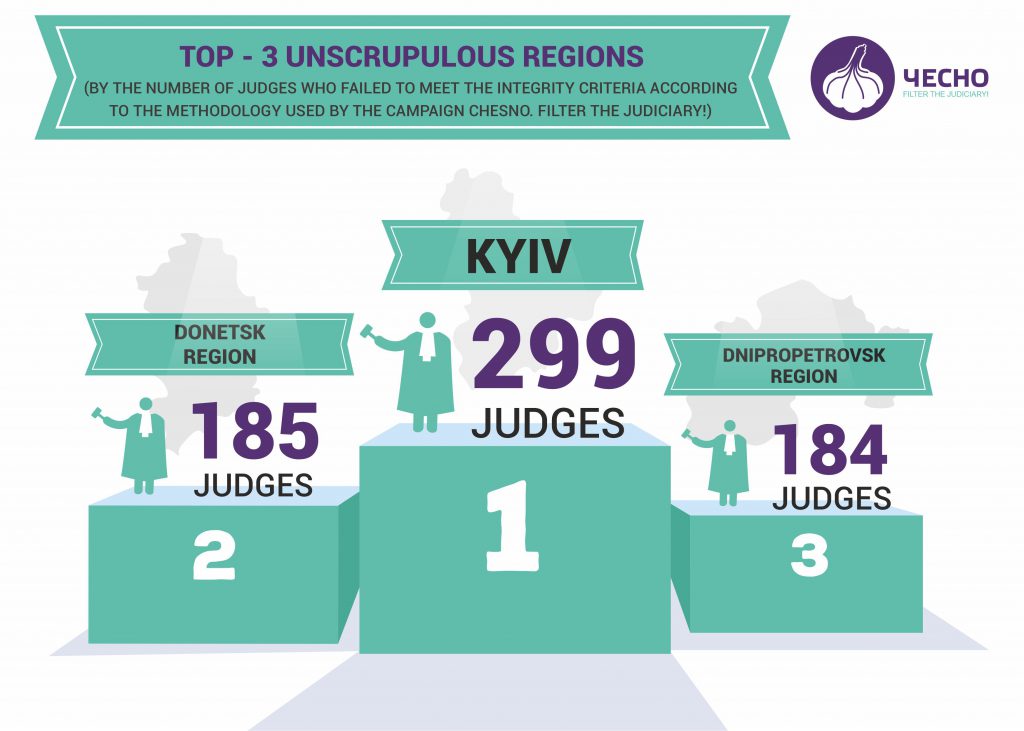 However, the establishment of a fair court in Ukraine requires the integrity of the judiciary. Therefore, CHESNO. Filter the Judiciary! held an expert discussion “Judicial Integrity: Ukrainian Dimension”, which also addressed the issue of trust in the judiciary.

According to Vadym Butenko, Deputy Chairman of the Council of Judges of Ukraine, there can be no 100% satisfaction with the work of the judicial system, because the one who lost the case will always remain dissatisfied. “I believe that the issue of integrity includes both ethics and conduct both inside and outside the trial. It also includes the timeliness of case consideration, and we need to talk about the integrity of the candidates, because many judges quit. We need to instill the desire to work in courts in people.”

Anna Adamska-Gallant, an international key expert on the judiciary of the EU Pravo-Justice Project, believes that proactive public actions in the judiciary are useful and important. In Poland, similar monitoring changed the behavior of judges, as they knew that they were controlled by the public.

“Another challenge is misunderstanding of the independence of the courts. In my opinion, and this was confirmed by the Constitutional Court of Ukraine in its resolutions, it is sometimes perceived as high salaries and lack of any control. I think it is wrong to forget about another component of judicial independence: accountability.” 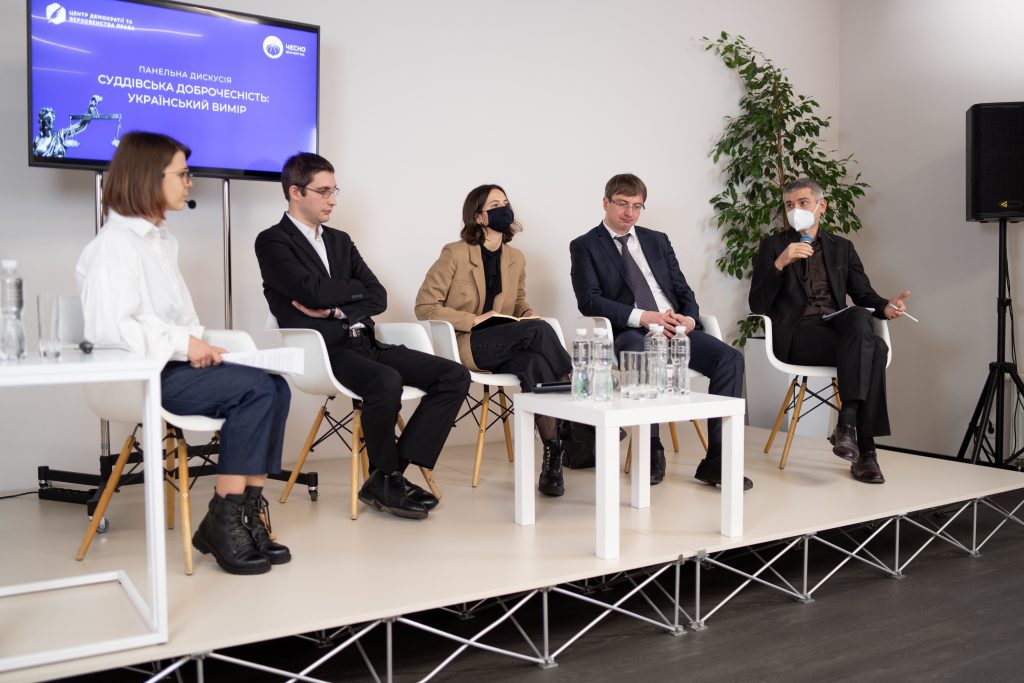 “I like the definition that integrity is the ability to follow one’s principles and not betray them even under pressure,” said Roman Kuibida, Deputy Chairman of the Centre of Policy and Legal Reform. He noted that the criteria according to which judge’s actions are dishonest were formed by the Public Integrity Council during the competition for the Supreme Court. Unfortunately, judges often pay less attention to integrity than to independence, and often see it as artificially imposed on the judiciary from the outside.

Halyna Chyzhyk, expert of the Anti-Corruption Action Centre, stressed that the PIC had issued more than 1,000 opinions of the lack of integrity, but those involved are still working in the system. According to her, integrity is the ability to act honestly and with dignity, even when no one sees it.

“The level of trust in judges is not growing every year. Because people see that a judge who lives in a palace has luxurious cars and adopts dubious decisions, etc. is still working. People do not feel the results of the reform. It is only the level of trust in the Russian media that is lower than in the judges,” said the expert.

Fortunately, the public now has an effective tool for establishing a fair trial in Ukraine, so we invite everyone interested to get acquainted with it and use it!

Campaign CHESNO. Filter the Judiciary! is grateful to all current and former team members, regional coordinators, public sector partners, the judiciary and the international community, without whom our achievements today would be impossible.