The material was published in the Detector Media

How bitter is the life of volunteers nowadays, and how much should the budget give up so that people and NGOs helping for free had a better life?

Volunteering is not just a mission or a lifestyle, but also a legal status. However, not all volunteers know what kind of state protection they can expect and what they have to pay extra for. The Parliament registered two initiatives aimed at improving the conditions for volunteering in Ukraine, in view of the challenges of the war. Nataliia Povtar, Lawyer of the Centre for Democracy and Rule of Law, and Yuliia Panura, Consultant on the Taxation of Civil Society Organizations and Charities at the Ukrainian Center for Independent Political Research, helped Detector Media to make heads or tails of the proposed amendments.

Who is a volunteer, what are his/her capabilities and guarantees? This is determined by the law “On Volunteering”. According to it, a volunteer works voluntarily for the good of society, providing assistance and without making any profit. As noted by Nataliia Povtar, the range of volunteer activities is exhaustive, but quite wide: it is allowed to help almost everyone, as long as it is within the law. Citizens of Ukraine, other states and people without citizenship are allowed to volunteer. Children aged 14-18 can become volunteers with the permission of their guardians, but it is forbidden to engage them in healthcare facilities, at the front, and to eliminate the consequences of emergency situations. Volunteers may work on their own or join non-profit organizations.

Non-profit organizations have the right to recruit volunteers, sign written contracts with them, issue certificates, insure their lives and health, compensate them for travel expenses, food, etc., and invite foreigners willing to volunteer. Having recruited a volunteer, the organization must guarantee safe and due working conditions, train them to volunteer and freely provide information about what they do. The law also provides for one-time payment in case of volunteer’s death or disability as a result of injury (applies to work in the war zone, which was localized in Luhansk and Donetsk Regions until February 24, 2022).

Ukrainian volunteers found themselves in extremely difficult conditions during the war. “Volunteers also have relatives to take care of. They focus on helping the people they see for the first time rather than their family. Instead of making the money and supporting themselves and their families, the volunteers spend their time and resource helping. Such a person should be protected socially as much as possible. This is the task of the state,” says Yuliia Panura. 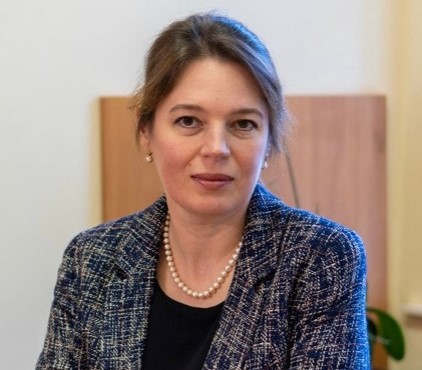 Yuliia Panura, UCIPR Consultant on the Taxation of Civil Society Organizations and Charities

She said that many initiatives have contacted the UCIPR free legal aid hotline with a request for advice on the law: “We receive the most requests from public activists as to “who can provide a volunteer ID”, “which organizations need volunteers”, “how can I officially register my volunteering”. Volunteers need a green light from the state to work, i.e. they need a specific law to grant them certain rights and guarantees of protection.”

To facilitate the work of volunteers and organizations which engage them, public sector experts, experts of the project Ukraine Civil Society Sectoral Support Activity and MPs proposed amendments to the law “On Volunteering” and to the Tax Code (respective draft laws Nos. 7363 and 7364). Some of the proposals are a response to the challenges of war, some were described in the Legal Reforms Map for Civil Society, a roadmap for desired changes in the public sector created by the sector experts in 2020. For changes to be effective, they should be considered and implemented as a whole, the experts stressed. According to Nataliia Povtar, these proposals are the optimum solutions needed immediately. “The package of solutions that are needed for the development of volunteering and civil society organizations is much bigger. Now we offer the middle ground — the solutions that organizations need to make things easier,” she explained 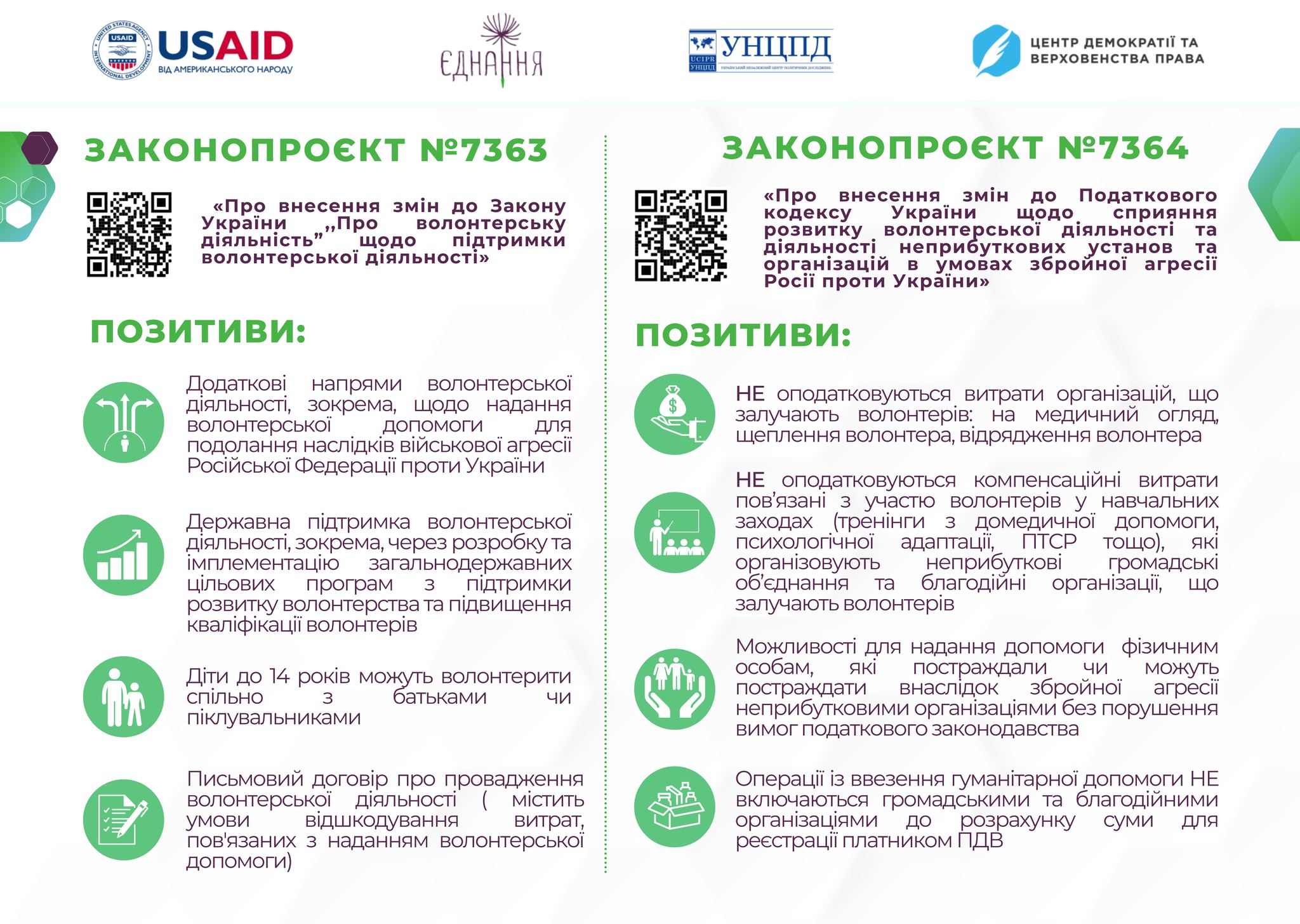 Expand the areas of volunteering, in particular include participation in overcoming the consequences of Russia’s armed aggression in Ukraine, as well as assistance to victims of infectious diseases and epidemics.

Define online volunteering. “The issue has become particularly relevant in recent years. The legislation did not offer certainty on this issue,” explained Natalia Povtar. This change is not capable of significantly affecting the field, the law does not prohibit online volunteering anyway. However, this formality should establish at the level of the law what has long existed in practice, and guarantee the volunteers the legality of their actions. This includes, for example, assistance in design, IT and communication solutions.

Oblige the state and local authorities to support volunteers. This is a systemic solution, which should become a prerequisite for the development of targeted state and local programs for the development of volunteering and volunteer training, explained Nataliia Povtar. The second step, if the amendments are approved, will be work with the Ministry of Social Policy and the Ministry of Youth. “The Ministry of Youth is trying to develop volunteering in the context of youth policy, but there should be a more systematic and strategic approach aimed at the comprehensive support of the volunteer movement in Ukraine. After all, volunteering is not about age categories, but about the absolute involvement of citizens. There should be a plan for the field development in the long term,” she added.

Pay compensation if a volunteer was injured/affected in the conditions of martial law throughout the entire territory of Ukraine, and not only in Donetsk and Luhansk Regions, as is the case now.

Allow children under the age of 14 to volunteer together with adults. It should develop a culture of volunteering and build personality, the proposal says. Restrictions on volunteering by children in the combat zone and disaster relief area, as well as in healthcare facilities, remain in place.

Exempt from the personal income tax the costs of vaccinations, medical examinations, travel and training for volunteers. The public sector has been asking for years to eliminate the discrepancy between Article 11 of the Law “On Volunteering” and the Tax Code, according to which compensation for volunteer expenses is perceived as income and is taxable. The lawmakers propose not to tax volunteer training as well. “You need to know how to work with people who have been affected by the war and are greatly distressed. It is necessary to prepare a cohort of volunteers who will have basic knowledge of pre-hospital care, psychological adaptation, etc. If a non-profit organization reimburses a volunteer for such training, it is important that these funds are not taxed,” said Yuliia Panura.

Also, here is a very common example: an organization sent a volunteer to another city to work in a mobile soup kitchen. The volunteer spent money on travel, accommodation and food. The organization compensates for the volunteer’s expenses, but the volunteer must pay personal income tax on it. That is, in addition to working for free, the volunteer is also in the red and has to pay to the state for his/her volunteering. This is considered unfair by the charities. “Our proposal will ultimately eliminate the need for organizations to use other compensation mechanisms to avoid dealing with this unjustified tax burden,” added Nataliia Povtar. 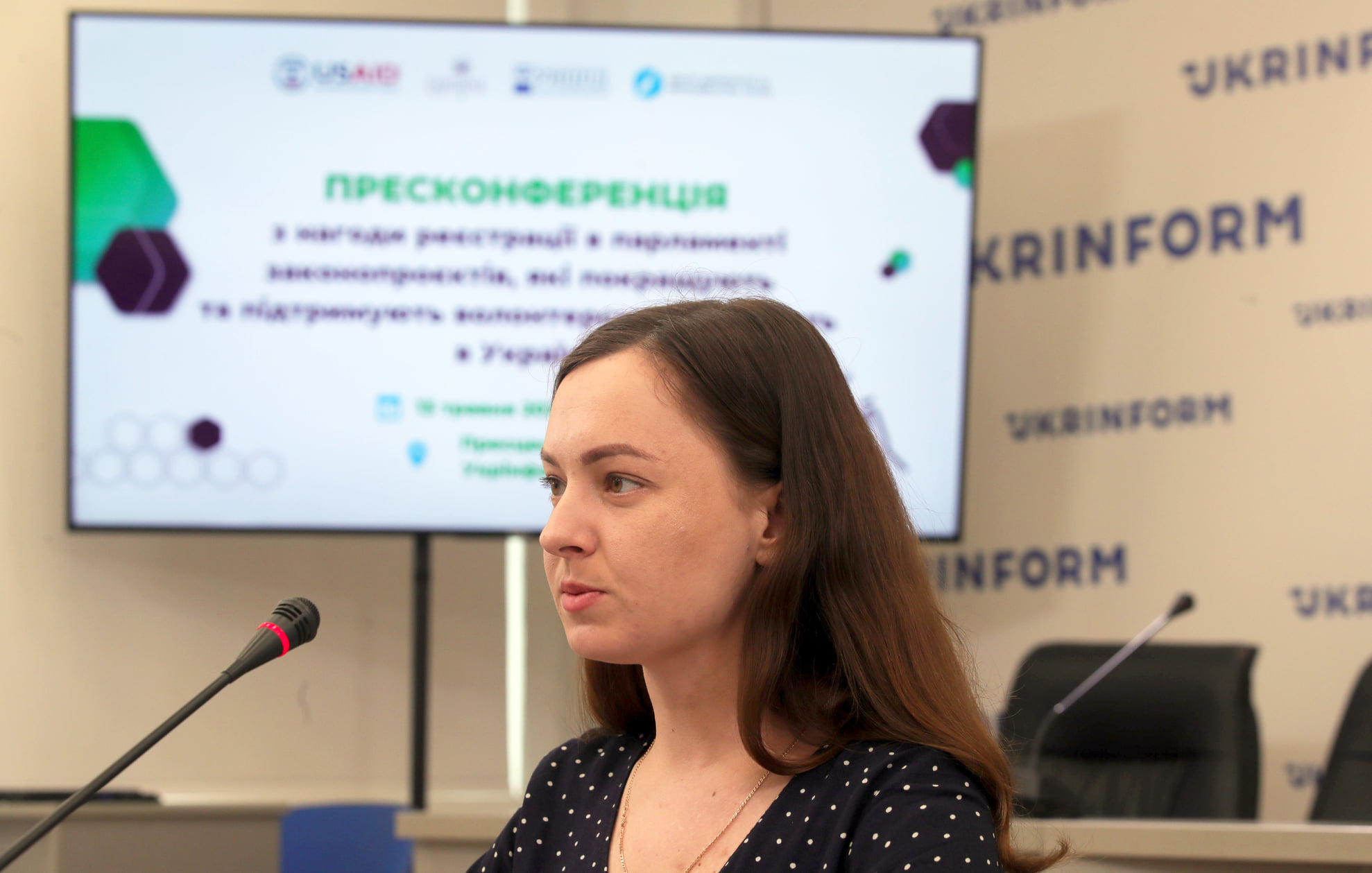 Mandatory conclusion of a contract with a volunteer in case of reimbursement of expenses. Contracts between organizations and volunteers can be concluded without any amendments to the law, Nataliia Povtar emphasized, but this practice is rare in Ukraine. The volunteers themselves are often unaware of this. In the case of tax exemption, volunteer must conclude an agreement with the partner organization (if expenses related to volunteering are reimbursed), which will stipulate the terms and conditions of reimbursement. In addition to guarantees, this will allow collecting more information about the cooperation between organizations and volunteers, which is currently lacking.

The importation of humanitarian aid should be added to the list of operations not taken into account for the purposes of registration by the VAT taxpayer. Simply put: In Ukraine, operations on the importation of humanitarian aid and provision of charitable assistance are considered in the calculation of the amount of one million hryvnia for the achievement of which the organization must register as a VAT payer. During the martial law, the Parliament has already allowed not including charitable aid in this one million limit, but there is still no such decision for the humanitarian aid. “We propose to include humanitarian aid import operations in the list so that they are not included in the amount for which the organization must be registered as a VAT payer. Such a solution will help organizations implement volunteer initiatives without additional burden,” explained Nataliia.

Experts say that the proposed amendments to the Tax Code will not significantly affect the revenue figures of the state budget. “If we refer to the year 2021, personal income tax makes up 10.5% of the total state budget revenues.  Even if we take the number of NGOs from the registry and assume hypothetically that each sent one volunteer, it is such an insignificant amount for the budget that it does not pose any threat. And a volunteer who receives compensation and then still pays tax on the funds received realizes: It’s still unfair. This is a reputational damage rather than a financial one,” explained Yuliia Panura. She added that in view of the country’s wartime budget policy, the issue of financing civil society organizations is quite debatable and problematic, so the volunteer movement needs to take care of itself and like Baron Munchausen, pull itself out of a mire by its own hair. “These changes and minimal tax breaks will be a significant help to the volunteer movement in Ukraine, which is now not only trying to develop independently, but also taking on a large part of the work that should be done by the state,” summarized the UCIPR consultant.

In the times of war, there is a problem with volunteers who have come to help Ukraine from abroad or are planning to do so. As Nataliia explained, they can stay in Ukraine either with a “volunteer” visa at the invitation of a non-profit organization and a corresponding residence permit, or on visa-free terms, but with certain restrictions: 90 days within six months. In the times of war it is difficult and sometimes impossible to obtain a visa because of the huge workload of the embassies and technical reasons. “There was a need for a mechanism so that people who want to volunteer in Ukraine could enter and stay here legally, without the bureaucratic problems of obtaining visas,” she explained. The government can solve the problem by extending the period of visa-free stay on the territory of Ukraine for the foreign volunteers to 180 days within 365 days during the martial law. The exception is citizens of Russia.

Draft laws Nos. 7363 and 7364 have already received scientific and expert opinions, and they will soon be considered at the meetings of the relevant committees. After that, the committees will decide whether to recommend them for consideration at the parliamentary session. “When it comes to changes to the Tax Code, it is always a difficult process. Most of the amendments proposed to the draft law No. 7364 are not new, the sector has been fighting for them for a long time. Now that the role of volunteer organizations in ensuring the life of the country is so great, these decisions can be advocated quickly,” explained Nataliia Povtar. Both draft laws are scheduled for consideration on May 25 at a meeting of the Committee on Social Policy. The draft law No. 7364 will also be discussed by the specialized “tax” committee. Dialogue has not yet started regarding the resolution on foreign volunteers.